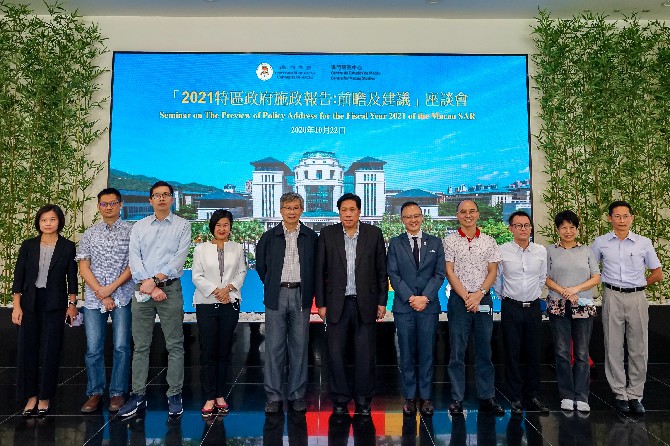 A group of academics that gathered yesterday at a University of Macau seminar to discuss suggestions for the upcoming Policy Address agreed that the success of pandemic control in Macau should not come at the price of a shattered economy.
At the seminar, Lau Pun Lap, President of the Macau Economic Association, suggested that the government negotiate with the central government in Beijing to relax the restrictive measures on travel to Macau.
Currently, mainland residents can only travel to Macau on the Individual Visit Scheme. Tour groups and hotel-flight ticket packages are still banned on the mainland. Travel has become easier between Macau and the mainland though.
Lau also disclosed that the requirement for negative Covid-19 nucleic acid tests has hindered the desire of mainland residents to visit Macau. In contrast, mainland residents do not need to do the test when they travel within the mainland, which explains why Hengqin was popular during the long holiday.
Lau estimated that Macau needs at least three years before it recovers to 2019 levels of economic output.
He also suggested the government should not cut social welfare. “Although we don’t expect a raise, we don’t desire a cut either,” the association president said. “Especially next year, there will be the legislative election. Cutting social welfare may [be unwise].”
Richard Hu, Dean of the university’s Faculty of Social Science, recommended the government to “hold the umbrella with one hand and work with the other,” implying that it should control the disease while reviving the economy.
Hu suggested that society should find the balance between disease prevention and normality.
During the first few months of Covid-19 control measures in the city, all non-local residents were banned from entering the city. At that time non-resident workers from the mainland who had returned home for the long holidays were not even allowed in.
Today, anyone not a resident of the greater China region is still prohibited from entering, except those racing in the Macau Grand Prix this November.
This October 1, the eight-day-long Golden Week, which usually sees an influx of tourists from the mainland, registered only 156,000 tourist arrivals in Macau, a plunge of 86% compared to last year’s holiday.
The daily average visitor arrivals during the eight-day holiday, which coincided with the Mid-Autumn Festival, stood at 19,538, according to data released by the Macao Government Tourism Office.
With few tourists coming in, the city, which relies heavily on the export of services, failed to find an economic recovery in the holiday period.
Comparatively, the Hengqin district of Zhuhai received nearly three times as many visitors as Macau during Golden Week this year, with 450,000 in total. This was up 36% compared to the same period last year.

A scholar has told a local radio show that the government’s cash handout program should be distributed in a hybrid manner involving both physical and electronic cash. Another has told the same show that it is difficult for the government to determine the eligibility of each individual.
Chief Executive Ho Iat Seng has previously hinted that the government would reconsider the necessity for the cash handout next year. After meeting with several traditional associations, he confirmed the handout would remain, but that further studies were needed to determine the manner in which it would be distributed. This has stirred up some debate in society.
Loi Hoi Ngan, Vice Director-General of the Macau Development Strategy Research Centre, told the show that the efficiency of e-payment is beneficial in lowering the costs of the distribution of the handout. However, he added that the general public has the right to comment on the manner of distribution.
The Chief Executive hinted that people regularly living outside of Macau might be deprived of the cash handout in future. However, he stressed more studies were needed.
Professor Matthew Liu from the Faculty of Business Administration of the University of Macau said that it is hard to overlook the contributions people living outside of the city make to the local economy. AL