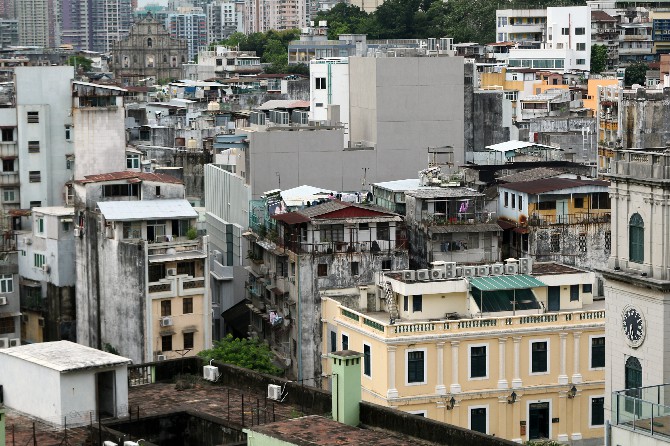 A resident has filed a complaint about an illegal rooftop structure at her building but the authorities did not intervene in a timely manner, leading to the door to the roof being blocked, among other disruptions, according to a report by local Chinese media Macao Daily News.
Living in a five-story building, the resident told the news outlet that the roof was vacant, with moon-appreciation events even being held on Mid-autumn Festivals. From early this year, it was suspected that the residents on the top floor had appropriated the roof for own use.
The resident pointed out that the rooftop outlets of ventilation pipes had been blocked since the construction started. Exhaust was trapped in the pipes and forced back to apartments on lower floors.
During the construction, some workers requested access to the complainant’s apartment. They drilled a small hole on a water pipe to check its condition at first, but later were forced to expand the hole, through which the complainant discovered the pipe was filled with a large amount of concrete.
Cracks even appeared on a crossbeam of the resident’s apartment. In addition, water leakage was also identified on the walls.
Given the situation, the resident filed a complaint separately with the Housing Bureau and the Land, Public Works and Transport Bureau (DSSOPT) in March. Both bureaus conducted site checks between April and June. As the complaints were without result, the resident filed another complaint with the Commission Against Corruption on allegations of administrative misconduct.
The latest correspondence the complaint has received from the DSSOPT was that hearings were in progress as part of the investigation.
The government has intensified its crackdown on illegal constructions, recently demolishing several structures that had been illegally built on rooftops.
DSSOPT had previously said in a statement that several demolition works were performed in May by the Permanent Inter-Departmental Working Group for Demolition and Vacating of Illegal Construction, who took steps to demolish clandestine construction operations located on the rooftops of three low-rise buildings on the Peninsula, namely in the Istmo Ferreira do Amaral area, as well as on Rua de Silva Mendes.