Macau casino operators are expected to post a combined loss of more than $800 million in earnings before interest, tax, depreciation and amortization (EBITDA) for the quarter ended September 30, according to a Bloomberg survey of analysts’ estimates.
Each of the six operators, which will begin reporting earnings in the coming weeks, will likely show negative quarterly EBITDA, according to the survey of seven brokerages.
SJM Holdings Ltd. and MGM China Holdings Ltd. are expected to report the biggest percentage changes from a year earlier at -171% and -150% respectively, according to the analysis. The smallest percentage change is expected to be recorded by Galaxy Entertainment Group and Melco Resorts at -127% and -129% respectively.
The industry average will be a -135% change to EBITDA compared to the same quarter a year earlier.
Macau’s casino industry has seen gaming revenue plunge by no less than 90% for six straight months as the pandemic forced countries to shut borders.
Gross gaming revenue in the third quarter fell 93.1%, compared to a 95.6% contraction in the second quarter. That sequential improvement amounted to a 51.1% increase quarter-to-quarter.
A slow recovery is underway after China gradually eased travel restrictions over the past quarter and formed a travel bubble with the world’s largest gambling hub. However, inconvenient entry requirements are still making it difficult for mainland patrons to visit the city. As a consequence, Macau trails other gambling hubs in bouncing back from Covid-19.
Many in Macau were left disappointed this month after the Golden Week period failed to resuscitate the city’s stagnant economy. Many small businesses had been hoping for a tourism bounce signaling that the worst of the pandemic was over.
Mainland Chinese visitor arrivals during the Golden Week holiday were still 84% lower compared with a year earlier. DB/Bloomberg 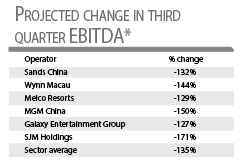