Briefs: Chui Sai On already with more than 66 nominations

The campaign office of Chui Sai On has revealed that the incumbent chief executive has already acquired more than 66 nominations from the members of the CE Electoral College, surpassing the minimum requirement. Vong Hin Fai, Chui Sai On’s candidate representative, claimed that they would be submitting the nomination form before the end of the nomination period on July 29. Nevertheless, the office did not disclose whether Chui Sai On would be attending the Legislative Assembly (AL) plenary session in August to answer enquiries from lawmakers. According to convention, Chui Sai On will go to the AL in April, August and November every year for the enquiry sessions and Policy Address. After the nomination period ends on July 29, candidates will have to wait until August 16 to start campaigning. The campaigning period ends on August 29, two days before the election, which takes place on August 31.

The Judiciary Police (PJ) was notified by the Customs Service two days ago at 6:30 p.m. regarding a body that was found in the water outside Westin Resort. After removing the body from the sea and transporting it to the Hac-Sa Nautical Centre, the PJ’s preliminary investigation indicated that the man, who was believed to be Chinese, was in his 30s. The body was bloated and no wounds were found. The deceased’s clothes, including his shoes and socks, were also intact. Nevertheless, the authorities failed to find any identification documents or valuable objects on the man’s body. PJ is not currently treating this case as suspicious, and is currently investigating the man’s identity and his cause of death. 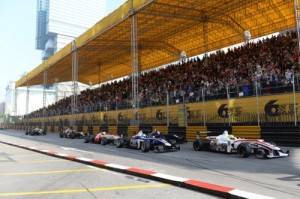 Merhi wants to return to Macau

Roberto Merhi is planning to contest this year’s Macau Grand Prix, according to Autosport. The Formula Renault 3.5 (FR3.5) title contender was the winner of the 2011 F3 Euro Series before moving to the DTM with Mercedes in 2012–13. He will return to Formula 3 in this weekend’s British round at Spa, in order to follow the Macau Grand Prix regulations. In order to race in the F3 Macau race, every driver must contest at least one F3 race in the current calendar year. Double R team boss Anthony ‘Boyo’ Hieatt said, “Roberto loves F3, he loves Spa, and he’s got a two-month break in the FR3.5 calendar and wants to stay sharp. “He wants to do it because he’s desperate to do Macau, and I’d love to have him in the car there, because I’ve always thought he’s a megastar. And he’s a Mercedes-backed driver, so it ticks all the boxes.”

Holders of the Macau SAR passport can enter Montserrat without a visa for a maximum stay of six months. The Caribbean island is a British Overseas Territory. According to information released by the local government, a total of 110 countries and territories have agreed to grant visa-free or visa-on-arrival access to the MSAR passport holders, while ten countries have agreed to grant the visa-free access to the MSAR Travel Permit holders.