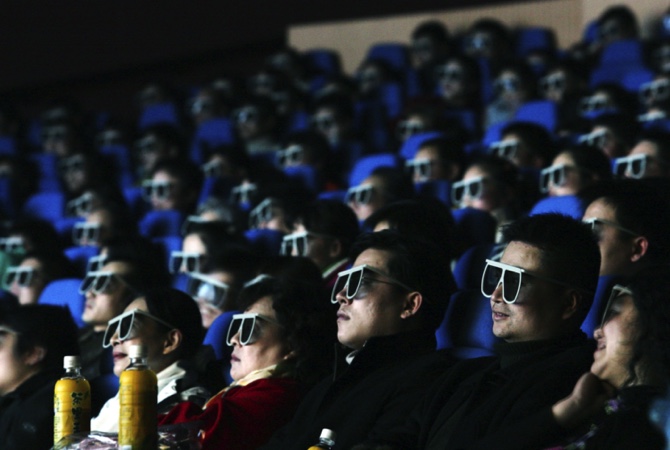 The Chinese unit of Imax Corp., the world’s largest jumbo-screen cinema platform, is planning to back more local films, shifting away from its dependence on Hollywood blockbusters.

Chinese-language films made up two of the five biggest hits for Imax China Holding Inc. this year, compared with one in each of the past two years and zero in 2016. Imax has said it wants half of the films it screens to be Chinese, without giving a time frame.

Imax is looking for growth in China, which is projected to overtake the U.S. as the world’s largest cinema market next year. That threshold is approaching just as the rising quality of local films, waning demand for older Hollywood franchises like “Fast and Furious” and “Transformers,” and import blackouts on peak movie-going dates are making it harder for U.S. studios to rely on China for big box office.

Hollywood’s share of China movie ticket revenue has fallen to 30% this year, the lowest since at least 2011, according to Maoyan Entertainment data on the 20 biggest-selling films each year. Of the top five 2019 movies, only one was made by a U.S. studio.

At the same time, Imax’s mainland China ticket sales grew 30% this year, compared with 2.9% for the industry, the company said, citing data as of the end of the country’s October National Day holidays. Box-office for Chinese local-language films rose to $108 million this year, a record, Imax said.

And more screens are on the way. The platform plans to add 286 theaters to its networks in mainland China, Hong Kong, Macau and Taiwan by 2022. The company had 681 theaters in Greater China as of the end of September, almost double the number in the U.S.

While Imax is moving to take advantage of changes in tastes of Chinese moviegoers, jumbo- screen rivals that could challenge Imax’s lead are also growing, said Wilson Chow, industry leader for PwC China’s technology, media and telecommunications. That’s why the company is trying to strengthen its local offerings, he said.

State-backed China Film Digital Giant Screen (Beijing) Co., for example, has said it aims to become the largest premium exhibitor brand in the country and has said it intends to add hundreds of its big screens across China. U.S.-based Dolby Laboratories Inc. is also expanding its partnerships with major Chinese cinema lines to build Dolby theaters, another premium format.

“The spending power of cinema-goers has also become increasingly strong,” Chow said. “Imax wants to get a head start in China’s high-end cinema market, because there will be many other local or overseas brands coming into the market next.”

Imax has also benefited from a World Trade Organization memorandum in 2012 that expanded the annual target for foreign films imported to China to 34 from 20. The 14 added slots are for premium format films in a country where the government tightly controls which movies can be screened.

While Imax has embraced the shift to local fare, it’s also broadening its aims for the kinds of Chinese films that might become hits. Record-setting box-office performance for science-fiction hit “Wandering Earth,” and animated feature “Ne Zha” bucked conventional wisdom that the genres don’t do well in China or in premium formats like Imax.

Animated features have done well in China, but haven’t been traditionally associated with Imax’s premium format. That may be changing. Disney’s “Frozen 2” last week set a weekend box-office sales record for animated imports at Imax China and has grossed about 370 million yuan in the country since opening on Nov. 22.

Imax generates most of its income by selling or leasing theater systems, including deals to provide them in exchange for a share of box office revenue. It also makes and distributes movies, remasters films in its format and provides production equipment and services.

“It was the success of ‘Wandering Earth’ that prompted the company to double down on the local strategy,” said Geetha Ranganathan, media analyst at Bloomberg Intelligence. “Sci-fi films like ‘Wandering Earth’ and animation like ‘Ne Zha’ lend themselves perfectly to the Imax format.” Shirley Zhao, Bloomberg