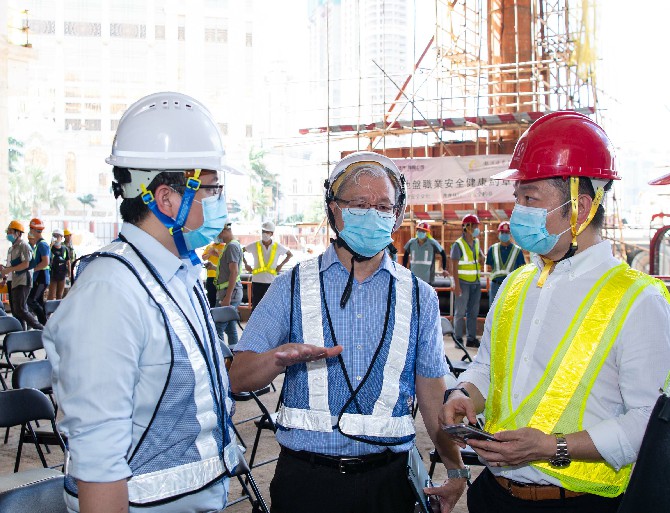 Some 350 local workers gathered at the site of an under-construction integrated resort yesterday morning to demand their employment with construction sub-contractors continue amid the Covid-19 pandemic.
The integrated resort is Galaxy Macau, the flagship resort of gaming operator Galaxy Entertainment Group (GEG), and the construction site is its Phase 3 expansion.
The 350 workers employed by the sub-contractors are specialized construction workers in the areas of formwork and bar bending. They finished their contracts earlier this month and the related compensation was already arranged, according to Galaxy.
However, Chinese-language media reports say the resident workers are unhappy that foreign labor is still being used on a nearby project for the Phase 4 project. They are asking that the gaming operator arrange for their employment to continue while they transition to working on the Phase 4 construction site.
“As the owner of the project, GEG has immediately ordered the construction contractor of its Phase 4 project to try its best to prioritize the recruitment of these local workers,” a statement issued by Galaxy promised. The operator added that the interview process began yesterday afternoon.
“We are now looking into the situation,” said Buddy Lam, Senior Vice President for Public Relations at Galaxy Entertainment Group, in remarks to Macau Daily Times. “We talked with the sub-contractors to see if these workers can be re-hired. How many workers can be re-hired? I don’t know because they are specialized in formwork and bar bending.”
Galaxy representatives also sought to end rumors yesterday that it had replaced its resident workforce with foreign workers. They clarified that “among all the related non-local [formworkers] and bar benders who exited the construction sites, none of them were recruited for the Phase 4 project. […] All the non-local workers had already been dismissed earlier, because they finished their works earlier. These local workers are specialized in formwork and bar bending, so they took a bit longer [to finish].”
The Labour Affairs Bureau (DSAL) said it was highly concerned by the situation. The DSAL said that many of these workers have already registered for training courses arranged by the labor authority. Moreover, it was following up with the employees and would investigate the matter in order to protect the rights of workers.