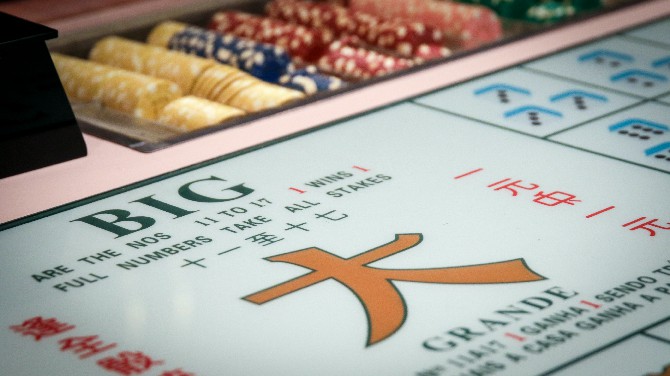 The use of a forged HKD100,000 gaming chip at a casino has led to the arrest of four local men, the Judiciary Police (PJ) spokesperson revealed yesterday during the joint press conference of the police forces.
The case dates back to August 30, when the security department of a casino in Taipa called the PJ after another staff member, a casino cashier, discovered that a chip exchanged at the venue was a fake.
The PJ officers immediately detained three men, who were still in the casino venue, and a fourth suspect later on, also in connection to the case.
After questioning, the PJ found that the man who exchanged the chip at the casino had received it from another suspect, a croupier that he claimed to have met via the mobile communication application WeChat.
The croupier told the man that he had a gaming chip worth HKD100,000 in his possession which needed to be exchanged and played in the casino before it went “dead.” According to the testimony, he also said that he could not play it or exchange it himself as the chip must be used by someone that did not have a previous gambling record in the local casinos.
The man accepted the deal and, taking a friend with him, met the croupier who was also in the company of another man that later escorted them to the venue in Taipa to play.
After exchanging the chip, the men played at the casino tables for some time, making a profit of about HKD130,000 from the chip until they were stopped by the casino security.
All of the men involved, ranging in age from 28 to 66 years, denied the crime to the PJ, saying that they had no idea that the chip was a fake. However, the PJ spokesperson said that the police force has gathered enough evidence to prove otherwise.
All four men were presented to the Public Prosecutions Office on September 1, accused of aggravated fraud.