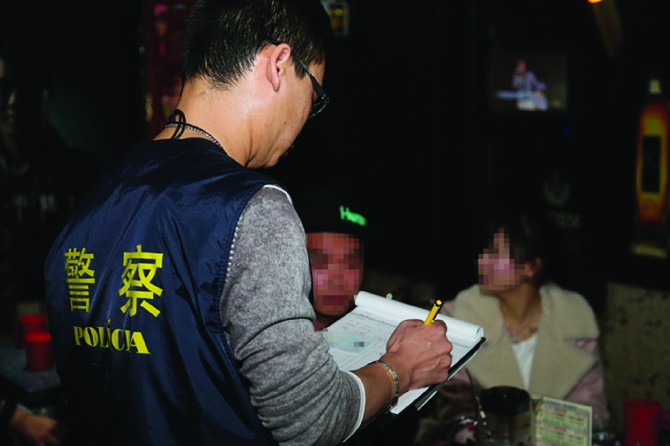 A 27-year-old man is facing criminal charges for multiple offenses he committed against his girlfriend, the Judiciary Police (PJ) reported during Friday’s joint police press conference.
The suspect, surnamed Ng, is an unemployed Macau resident. He and his girlfriend have an 11-year-old daughter. The three of them live in an apartment in the central district.
In July, the victim attempted to break up with the suspect and requested Ng move out of their apartment. At that time, the suspect refused.
Ng and the victim later engaged in a dispute in August, which led to the woman reporting the incident to the Public Security Police Force (PSP). After this incident, Ng stopped going to their apartment.
However, at 4 a.m. on Wednesday morning, when the victim returned home, she found that Ng had snuck into the house and was hiding in the kitchen.
When he was spotted, he immediately attacked the victim, covered her mouth with tape and tied her hands up with rope. Then he allegedly raped her.
The victim fought Ng and tried to reach a phone and call the police department, however the suspect seized the phone and damaged it.
After that, the man prevented the woman from leaving the apartment.
Approximately 20 minutes later, the victim convinced Ng to let her out of the apartment to buy food. As she was walking outside, the suspect followed her. However, the woman managed to get to a friend’s house and called the police department for help.
Shortly after, the PSP officers intercepted Ng near his ex-girlfriend’s apartment.
During the police interrogation, Ng claimed that he did not sexually assault the woman and that his only intention was to repair their relationship.
However, judging from the superficial injuries on the victim’s body, the PJ believes there is strong evidence indicating that the man had raped her.
The Judiciary Police charged the man for rape and other crimes, and has handed him over to the prosecution authority.
In June, a 24-year-old local man was accused of crimes including aggravated assault, rape and unlawful detention of his girlfriend who had decided to break up with him.
In May, a civil servant from the Health Bureau was charged with raping his wife and accused of domestic violence.