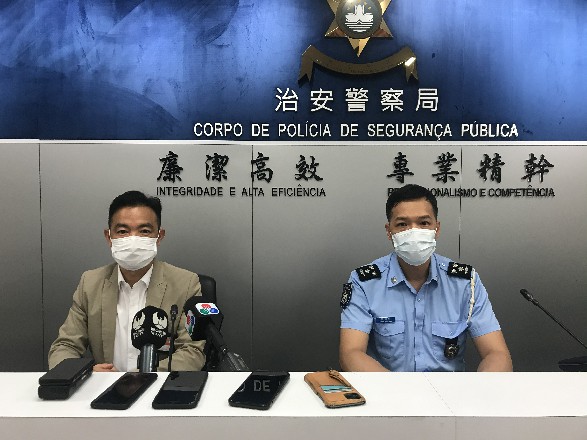 A broker made 60,000 Macau patacas from a bogus marriage between a Macau permanent resident and a mainland resident, the Public Security Police Force (PSP) said yesterday during the joint police press conference.
The case was first discovered by the Macau SAR Identification Department.
On August 7, the PSP forwarded a local man, surnamed Cheang, and one local woman, surnamed Guo, to the prosecution authority under the suspicion of fake marriage.
In 2007, during a period of unemployment, Cheang met a woman, who is the broker in this case, in a local casino. The broker convinced Cheang to marry an unknown mainland woman, Guo, as a means to make money.
The specific business proposal consisted of Cheang marrying Guo to help the latter get a Macau ID, while Cheang would receive 40,000 Hong Kong dollars in return. After the marriage, Cheang helped Guo apply for a one-way travel permit to Macau, a visa the mainland government issues to a resident as an approval to leave mainland China and immigrate to Macau.
After the marriage and travel permit were approved, Cheang and Guo did not maintain any form of contact. In 2013, Cheang divorced Guo, who had already obtained her Macau ID. At that time, no government department noticed the marriage being bogus.
In 2018, Cheang, whose life situation had deteriorated, met another person, who became a broker for Cheang’s second fake marriage. The matchmaker connected Cheang and Du, a second woman from the mainland who later married Cheang.
This second marriage drew the attention of the ID department.
On August 6, PSP police officers visited Cheang to investigate his second marriage.
The police found no evidence of Du living in the house. Upon police interrogation, Cheang failed to mention any evidence to suggest that there was a relationship between himself and his second wife. He eventually admitted to PSP that the relationship was fake. From the second marriage, Cheang made 40,000 Chinese yuan.
As of the police press conference yesterday, the PSP had not apprehended Du, who is believed to be in mainland China. However, the first woman, Guo, was found in Macau.
Guo told the police officers that she paid her marriage broker 100,000 Chinese yuan for the service, admitting that the marriage was a fraud. The middleman profited by 60,000 yuan.
Both Cheang and Guo are now in the hands of the prosecution authority. Du is still in mainland China.

The Public Security Police Force (PSP) recently encountered two drunk drivers who were unwilling to accept that they were intoxicated.
On August 9, the PSP received a report from the customs authority regarding a case of facility damage. Upon arrival, PSP officers found one damaged car and three bent iron fence railings seemingly damaged by the vehicle.
The driver of the car, a local woman in her 30s, was found at the site, apparently intoxicated.
When police officers tried to enforce an alcohol test, the woman became difficult. She was asked to blow into the breathalyzer for eight to nine seconds to complete the test. However, the woman only held the device for one or two seconds each time she was tested.
The PSP took her to the hospital for a blood test. She was uncooperative again and stopped the nurses taking a blood sample.
Eventually, the police were unable to test her alcohol level and charged her for defying orders.
The second drunk driver is a local man in his 30s. On August 7, PSP officers found him on Av. Marginal do Lam Mau smelling strongly of alcohol. His breath analysis showed 1.65 mg per liter blood. The man requested another test at the hospital. The hospital test result showed an even higher intoxication level, marking 1.87 mg per liter. JZ