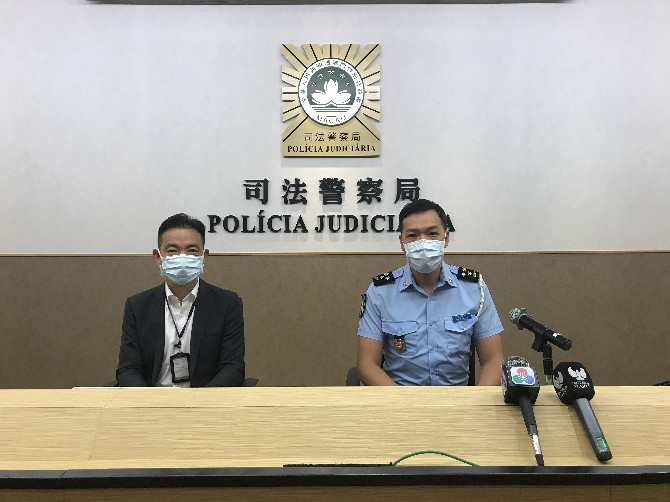 Women in Macau, regardless of their residential status, continue to lose money to online fraudsters pretending to be western men, according to a criminal case report the Judiciary Police (PJ) disclosed during a press conference yesterday.
These fraudsters, sometimes referred to as catfish, are people who lure others into a relationship by means of a fictional online persona.
The PJ yesterday reported a fraud case involving a young Taiwanese woman who lost money to a catfish claiming to be an “American soldier”.
The local police authority has previously reported various fraud cases where either a Macau local women or non-local female workers in Macau fell victim to online romance scams involving, in particular, unidentified individuals who disguised themselves as Caucasian males working as engineers or soldiers abroad.
Recently, a 33-year-old woman from Taiwan working in Macau, reported herself a victim to such fraud. The suspect is an unidentified stranger who claimed to be an American soldier. From May, the victim was in contact with the unidentified man. After chatting online for a month, in June, the unidentified online individual told the victim that he had shipped USD500,000 to her in Macau and told her to collect the money.
The “American Soldier” asked the victim to switch to QQ, one of mainland China’s most used social networks in order to speak further.
Later, the woman was contacted by an alleged cargo company asking her to choose which type of shipping she would prefer for transporting the money.
The victim requested the fastest shipping method and thus she was asked to pay USD5,000 for the service. The “shipping company” provided her with a Hong Kong bank account to transfer the money to. The victim complied with the first money transfer order.
Later, the same “shipping company” contacted her for another transfer, providing various excuses such as the fact that the cash was intercepted by the Indonesian customs authority.
When the “American soldier” said that he needed a deposit in order to retire from the military, he asked the woman to send him money. The victim once again believed in the excuses and made five bank transactions to a designated bank account in Hong Kong.
The victim made 11 transactions totaling HKD709,000 to the bank account.
Earlier, in May, a local woman fell victim to an online romance where an individual claimed to be an engineer from Europe. The “European man” and the victim only knew each other on social media. After talking for three months, the “engineer” convinced the woman that he had shipped gifts to her from Europe. Similar to the Taiwanese woman in the above-mentioned case, the woman in this case was also contacted by a “shipping company” to pay a fee in order to get the package. The woman lost HKD75,000 to this fraud.
In 2016, a 28-year-old local woman lost 130,000 patacas to scammers after she was convinced that a catfish was an American soldier. In the same year, another woman reported a loss of over seven million patacas after she believed that the catfish was a British man working as an engineer.
In these cases, the perpetrators were all claiming to be citizens from developed western countries, and mostly Caucasian men. They also posed as people with high occupational prestige. As of today, the majority of the reported victims are ethnically Chinese women.