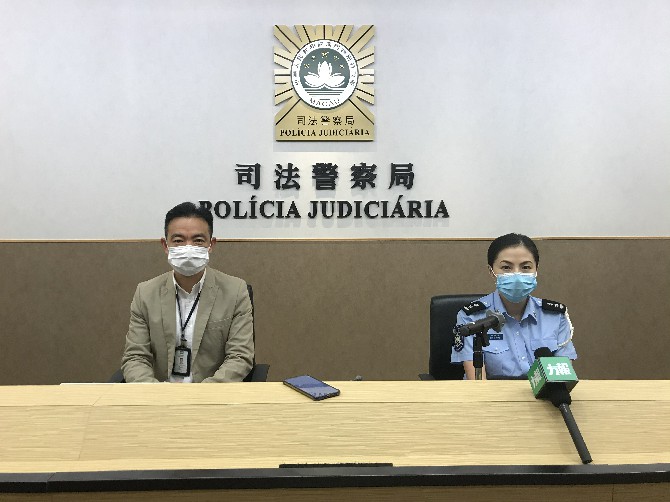 The Judiciary Police (PJ) has apprehended a woman from the mainland who is suspected of imprisoning her creditor. The suspect is accused of detaining the creditor after the victim demanded the return of HKD40,000.
The Judiciary Police (PJ) reported the imprisonment case during the joint police press conference on Friday.
According to the police, both the victim and suspect are women from the mainland in their 40s.
The case was reported to the PJ in November 2019. The police authority were only able to apprehend the suspect, surnamed Ou, on September 16.
On November 15 last year, the victim met the suspect at a casino located in the Macau Peninsula. Several hours after the meeting, Ou asked the victim for an interest-free loan of HKD40,000.
The next day, the victim met Ou at the casino again and immediately asked her to pay her back.
Instead, Ou accused the victim of disrespectful behavior because of the way she had overtly pursued the debt in a public place, saying that she had made her “lose face.”
Ou and several of her companions abducted the victim and took her to an apartment in the Macau Peninsula.
She contacted the victim’s husband that evening, asking for a ransom of MOP50,000. The victim’s husband contacted Ou saying that he had the money ready and demanded the trade occur face-to-face, in the presence of both Ou and the victim.
During the trade, the victim freed herself from Ou and went to the police to report the case.
After spending 10 months outside of Macau, Ou was apprehended on September 16 at the Border Gate when she was crossing the immigration checkpoint in an attempt to enter Macau.
Upon police interrogation, Ou denied all the accusations.
Believing that there was sufficient evidence showing that Ou had committed the crime, the PJ officially charged her with depriving others’ freedom of movement and handed her over to the prosecution authority.
The Public Security Police Force (PSP) also reported a case of indecent exposure at the press conference.
This time, the suspect is a male bluecard worker in his 20s from the Philippines. On the night of September 15, the suspect boarded a bus near Pui Ching Middle school. The victim, a Macau woman in her 20s, was asleep on the bus.
Although there were several empty seats on the bus, the suspect chose to stand next to the woman. During the ride, the suspect made indecent contact with the woman’s shoulder using his genitalia. The incidence of sexual harassment was witnessed by two passengers sitting behind the victim, who reported the case to the police authority.