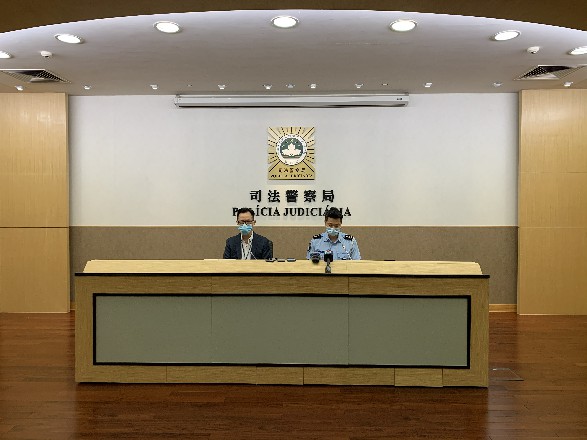 A case of drug trafficking in which express courier services were used has been busted by the Judiciary Police (PJ), with MOP1.64 million worth of cocaine seized.
Besides the seized substance, a man and a woman have been arrested on the charges of drug trafficking and drug use.
The male suspect is 33 years old and the female 34. Both are non-resident workers from the Philippines. The man works as a barber and the woman as a domestic helper.
The PJ initially received intelligence about an international cartel that was in the practice of trafficking illicit addictive substances to Macau by post for sale. According to the law-enforcement entity, the method came into existence amid tightened immigration policies around the world.
Following its communications with the Hong Kong Customs and Excise Department, the PJ obtained information about the identities of the suspects, as well as learning that a parcel containing the illicit substances would arrive in Macau on October 12. The parcel was sent from South Africa to Macau via Hong Kong.
In the afternoon on the identified day, inspectors from the PJ intercepted the parcel at the barber shop where the male suspect works. Both suspects were in the shop. Although the investigators witnessed him signing for the parcel upon receiving it, the male suspect argued that he was only receiving the parcel on another person’s behalf.
Meanwhile, the woman said she was only friends with the man. Both denied any actual connection with the drugs.
The PJ checked the courier parcel and discovered it was refitted on the inside, with compartments on all sides holding a total of 499 grams of cocaine. The core of the parcel was filled with scarves and pieces of cloth to camouflage the substances.
The PJ inspectors, however, could not find any illicit substances on the two suspects. PJ intelligence alleged that the man was a member of a drug cartel, who was responsible for receiving and keeping drug parcels in Macau, before transferring them to other individuals with MOP3,000 remuneration each time. Urine drug tests returned a positive result in the case of the woman.
Casino-related
scams on the rise
Casino-related scams have been on the rise recently, with the PJ reporting a number yesterday. Among these, a local female “gambling-addict” has allegedly appropriated 12 million yuan from her friend for the purported purposes of currency exchange.
She lost most of the money at the gambling tables and was arrested upon arrival in Macau after almost a year on the run.
The 40-year-old woman became friends with the male victim in 2017. She helped the victim with money wires and chip exchanges several times, amounting to 15 million.
In December last year, the victim asked the suspect to help change 11.8 million yuan into Hong Kong dollars and deposit it into a junket fund. The suspect deferred the exchange before ceasing contact with the man.
She changed the amount to Hong Kong dollars and lost 11 million at a casino. She then fled with the remaining HKD2 million.
When arrested, she denied the accusations. She said the money was a repayment of an earlier debt the man owed her.