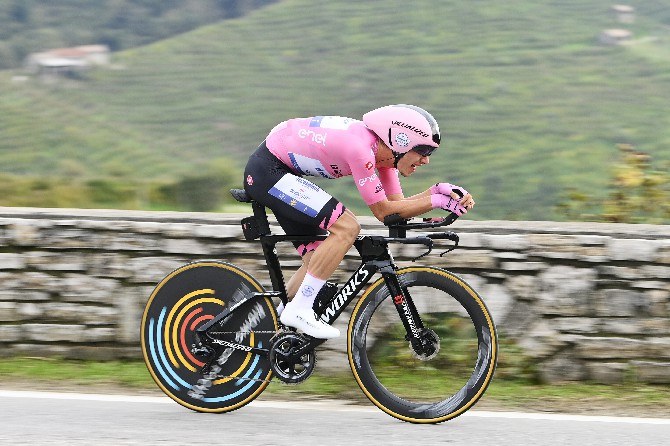 The Spanish Vuelta cycling race starts today amid tight health restrictions in the hopes of avoiding the coronavirus infections that have knocked some riders, including top contenders, out of the Giro d’Italia.
Primoz Roglic is back to defend his title weeks after he lost the Tour de France on the final competitive stage. Two-time champion Chris Froome will be his main challenger in his final grand tour for Ineos, formerly Team Sky, before he joins Israel Start-Up Nation next season. Thibaut Pinot, Alejandro Valverde and Johan Esteban Chaves are also among the contenders.
Despite the strong lineup, most of the focus will be on the success of the Vuelta’s health protocols.
The Vuelta is getting underway before the Giro finishes next weekend. The two grand tours, like the Tour de France, were postponed because of the pandemic, and the tight calendar forced the Vuelta and Giro to overlap.
The Tour finished without any infections except for race director Christian Prudhomme. The Giro, however, has lost two full teams to the virus. Mitchelton-Scott and Jumbo-Visma withdrew from the Italian race last week following a series of positive results from the first rest day. Overall contenders Simon Yates and Steven Kruijswijk were among those who tested positive.
With Spain struggling to contain its own resurgence in cases, Giro director Mauro Vegni said last week “seeing the numbers in Spain, I would be very worried for the Vuelta if I was in (race director) Javier Guillén’s shoes.”
Guillén has tried to reassure the Vuelta participants and staff that the race can be held in safe conditions, following the example of the Tour. Both the Tour and the Vuelta are run by the same company.
All riders and staff for the teams and the race underwent tests on Sunday. The Vuelta will follow the same procedure as the Tour of repeating the tests on the race’s two rest days.
One difference from the Tour is that at the Vuelta a team will be asked to leave the race if two riders test positive, as opposed to two team members, including staff, at the Tour.
The Vuelta has taken several steps that it hopes will keep the riders healthy and the race going until it reaches Madrid.
The public is encouraged not to gather at finish lines, and organizers will cut off access to the mountain passes that are popular gathering spots for fans to cheer the riders on the grueling ascents. The race is sending the message out on social media asking its fans to stay at home and watch the race from television this year.
A facial-recognition phone app will replace the traditional signature of riders at the start of each stage to reduce contact with pens and surfaces.
All team members and race staff are asked to wear face masks, frequently wash their hands, respect social distancing and have no contact outside the traveling “race bubble.”
A mobile testing laboratory will travel with the race in a 14-meter trailer. The lab will analyze all the tests during the race. Staffed by 18 specialists, it has the capacity to analyze up to 1,000 tests per day with results in 24 hours, race organizers said.
Every person accredited for the race must present a negative test result from within five days of the race start. AP

In his 1st Grand Tour, Almeida keeps adding to his Giro lead

First Grand Tour. First lengthy time trial. And first overall.
Portuguese rider João Almeida just keeps checking off new personal bests, the latest by increasing his grip on the pink jersey in the hilly 14th-stage time trial of the Giro d’Italia over the weekend.
The 22-year-old Almeida has held the lead since a strong effort up Mount Etna in Stage 3.
“We learn every day,” Almeida said. “We’ll see how I react for the last week.”
Only seven stages remain before the race ends in Milan next weekend with another individual time trial — although the final week is filled with grueling climbs through northern Italy and Almeida himself has acknowledged that he has no idea how his body will react to a third consecutive week of racing.
“I’m not afraid at all. I’ll just keep doing my race and we’ll see day by day,” he said. “So far I feel good. Today I felt good.”