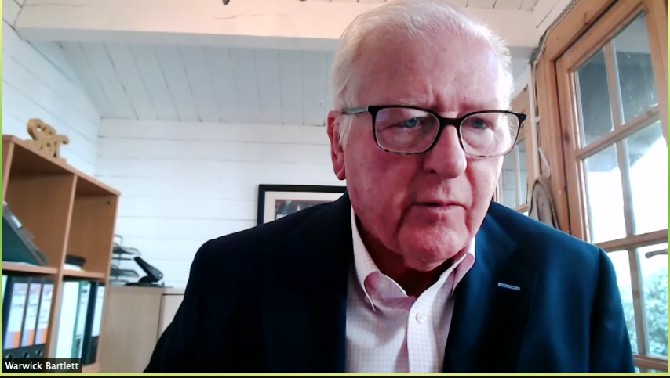 CEO and owner of Global Betting & Gaming Consultants (GBGC), Warwick Bartlett, considers it almost certain that all six gaming concessionaires will continue under the next tender.
“The tension between China and the U.S. is likely to increase and the reason for that is China’s GDP is scheduled to overtake the U.S. by 2030 or at least draw level to it. If that happens, and there is a very good chance that will happen because China is coming out of Covid-19 in a much better position than the rest of the world, their GDP is likely to grow at a much faster rate,” said Bartlett during an online conference held on Wednesday by Global Gaming Expo (G2E) Asia.
“Therefore, tensions are likely to rise because when one superpower feels that another superpower is drawing close. There is inevitable tension and we saw this many times [in the past].”
Bartlett also noted that indications of growing tensions has been clear in recent messages from both presidents. American president Donald Trump has been saying that he has no interest in speaking to Chinese president Xi Jinping right now and hinted that he could even cut ties with the world’s second largest economy. The Chinese government, meanwhile, has announced that it is considering to bring forward a bill that would make it a criminal act to target Chinese citizens for gambling services. This comes after Chinese authorities also claimed that they would not accept the acquisition of social media mobile application TikTok’s U.S. operations by Microsoft and may take action to prevent the deal if a sale is forced by the Trump administration, calling it a “theft.”
According to Bartlett, what is important to bear in mind is that “the power of gambling lies with China because it is the Chinese [government] that sends their citizens where they wish them to go.”
This was highlighted when the U.S. introduced a new weapons system to South Korea so they could defend themselves better from an attack from North Korea. China immediately reacted by stopping tourism to South Korea, which, according to the expert, resulted in quite a substantial fall.
This power can also be seen in the bans established by China which prevent their citizens from visiting Vietnam, Cambodia, and the Philippines to gamble.
As for Macau, the Chinese government also “redirected the pattern of the trade by taking the view that VIP gambling is favorable to money laundering. They have discouraged it and asked the operators to invest more heavily in mass market and premium-mass.”