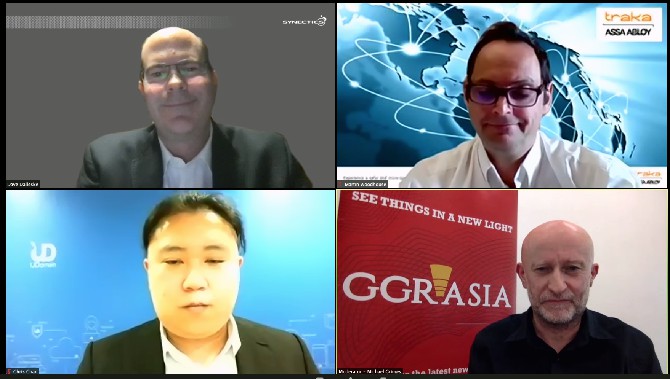 With the help of fast-evolving technology, the gaming industry is ready to face the new challenges posed by the Covid-19 crisis, a panel of specialists taking part in an online conference on the topic of safety and security as part of the program of Global Gaming Expo (G2E) Asia have said.
The online conference, held over video conferencing platform Zoom, in collaboration with casino news website GGRAsia, included three representatives of safety and security technology suppliers: Dave Dalleske, vice president of sales, Asia Pacific at Synectics, which is involved in areas including casino surveillance technology; Martin Woodhouse, head of Asia-Pacific, Middle East and Africa, for Traka/ASSA ABLOY, which is involved in areas including management of secure access; and Chris Chan, head of cybersecurity research, UDomain, a specialist in data and digital security.
As part of the debate, the specialists addressed the particular concerns and challenges posed to the industry in the era of Covid-19.
As mentioned by the principal of GGRAsia and moderator of the talk, Michael Grimes, the purpose of the conference was to address the points of view of security of people and physical infrastructure, safety, and security of money, and safety and security of data.
Dalleske noted that facial recognition is the most common solution to the challenges in gatekeeping, in the efforts to stop people that are potentially infected with the disease from reaching the casino floor. Although this is a challenge due to the requirement of wearing face masks, “it is still possible,” he said, adding, “the other option is tracking people by their clothing and/or accessories they are wearing or possess. Current surveillance devices allow filtering on video footage and to pin-point where a certain person has been, or the people that were in contact with them.”
“New technology allows, for instance, operators to filter by something like people wearing a red shirt and glasses, etc,” the expert in surveillance noted, adding that such technology saves a lot of time in tracking a person, where this person has been and the identity of the other people in contact with them to prompt direct actions.
As for early-stage intervention, Dalleske said that the fever detection camera devices work well and that they are in important tool for the early detection of potential problems.
Addressing the main concerns of gaming operators, the same expert noted that the “main point is the speed of this process. We don’t want people waiting to be able to enter the properties.”
Woodhouse compared the security levels of any given company, including gaming ones, to the layers of an onion, saying that the key factor to success is “to have a unified ecosystem.”
For the same specialist, the people must “look at technologies that can match each other and help each other, using biometric and facial recognition data, [together with] other data available to prevent risks to the workspace.”
For Woodhouse, the secret of success lies in automation.
“We can automate these processes to save time and resources and we still can be in total control,” he noted.
Questioned by the moderator on the use of robots that perform cleaning tasks using UV ray technology as well as UV “showers,” such as the ones currently in use by Okada Manila casino, Woodhouse said, “When you get to that point, I think you are already too late [in the process of preventing contagion]. When this happens it usually means that the previous processes of securing the spaces have somewhat failed.”

During the talk, the security experts also noted that remote work, in most scenarios, could potentiate security breaches.
Chan noted that this problem can be divided into two elements: the first relating to the employees’ flaws, which can pose risk, and the second regarding the system itself and its vulnerability to attacks from the outside.
According to Chan, the most common source of data security flaws is insider errors.
Citing statistics, the specialist said that 78% of phishing emails are still being opened by staff and over 50% have effectively replied, providing the data requested, noting that such a problem can only be tackled with training.
“We have run several tests; in one of them we requested to security keepers by email to provide their private security data or to follow links that would result in security breaches and surprisingly over 50% of these employees have submitted their info,” Chan said. “Apparently there is a huge difference between where you are and your mindset. People that in any situation would not cause a security breach while at work would be happy to do so when out of the work environment.”
This fact led Chan to say that constant training is needed to ensure that safety methods put in place continue to have effect over time.
As for hacking, Chan noted that the approach of UDomain is to be constantly in the position of the hackers and continuously assess the risks to the security of the system.
“We need to consider both […] staff awareness and continuously check and fix any weaknesses that we encounter in the system,” Chan remarked, saying, “Hackers are definitely exploring the work-from-home situation to find security breaches.”
On the same topic, Woodhouse said, “Part of the solution is to leave the keys and instruments of access to important parts of the system at the workspace,” adding, “there are a lot of solutions to track those devices and keys that are very effective.”