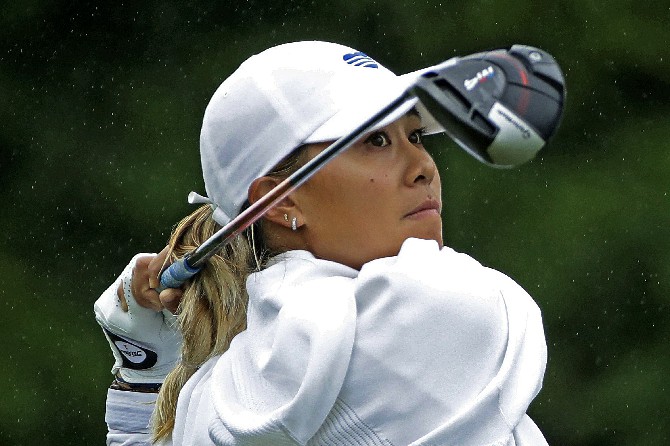 Danielle Kang was away from the LPGA Tour for six months during the COVID-19 pandemic, which is not to suggest she was without competition.
She lost track of the games she played with her brother, Alex, who has spent two seasons on the Korn Ferry Tour, and boyfriend Maverick McNealy, in his rookie year on the PGA Tour. She played the back tees and forward tees, moved about to different courses in Las Vegas and felt her game improving.
It paid off Sunday when Kang closed with a 2-under 70 and held on for a one-shot victory over Celine Boutier in the LPGA Drive On Championship at Inverness, the first LPGA Tour event since February.
“I made sure I played golf as much as I did normally, not because I had to but because I wanted to,” Kang said. “I’m so thankful for the time. I tried to make the best of it. We had all the time in the world. Golf courses were open in Nevada. I didn’t have to rush and cram for a test. I’m proud of the work I was able to do.”
She played a brand of steady golf that wins on tough golf courses, an Inverness was all of that. Only five players finished under par in rapidly changing conditions.
Kang and Boutier, who closed with a 71, turned the final hour into a duel. Boutier hit the pin with her tee shot on the par-3 12th for birdie to get within two shots, Kang made her only bogey on the par-5 13th with a soft chip, and Boutier rolled in an 8-foot birdie on the 14th to tie for the lead.
But it was Boutier who blinked. She missed a short par putt on the 15th hole to fall one shot behind, and then stuffed her approach to 4 feet below the hole on the 18th. Instead of a playoff, however, Boutier made a tentative stroke on a tricky putt and the ball caught the left edge of the cup and spun away.
Kang, the No. 4 player in the women’s world ranking, won for the fourth time in her career. It was her first LPGA competitoin since Jan. 23 in Florida. She did not go to Australia, and then the COVID-19 pandemic halted play on the Asian swing and then on through the summer.
She has won in each of her last four seasons, starting with the Women’s PGA Championship in 2017.
Inverness hosted the one-time event, and both contenders are likely to be back next summer when the storied club hosts the Solheim Cup. The LPGA Tour stays in northeast Ohio next week for the Marathon Classic.
Kang finished at 7-under 209.
Minjee Lee of Australia shot 70 and finished alone in third, three shots behind. She was followed by Yui Kawamoto of Japan, who shot a 72, and Jodi Ewart Shadoff of England, who faltered later for a 75.
Ewart Shadoff, still searching for her first LPGA Tour victory, was three shots behind on the back nine until she went bogey-bogey-double bogey through the 15th hole, and finished with a birdie when it was too late. AP