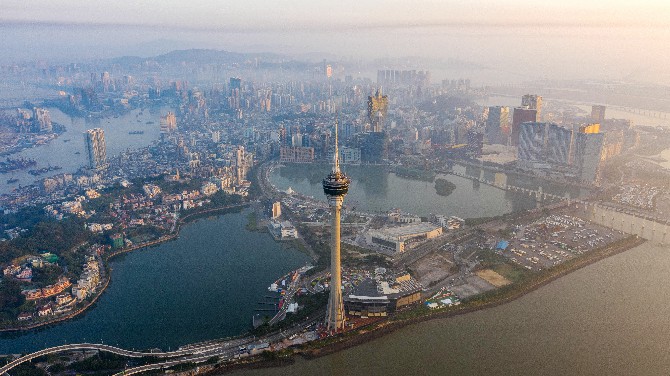 Vincent U, Executive Director of the Macao Trade and Investment Promotion Institute (IPIM), said that a market reshape is taking place in Macau as the idea of the Greater Bay Area gradually emerges.
Speaking about the series of trade shows happening soon in the SAR, the IPIM executive disclosed that as per the information available to him, hundreds of delegates have agreed to visit Macau for the trade events from various mainland regions.
According to the IPIM executive, Macau is enjoying the benefits of the “One Country Two Systems” principle, and its position as a center for world tourism and platform for China-Lusophone country interactions. Those have set the foundation for the favorable business environment.
He recalled that this year saw the promulgation of the Wealth Management Connect Scheme between the mainland, Macau and Hong Kong, which focuses on individual investors and retail investments.
Through the scheme, residents from the nine GBA cities are now allowed to invest in wealth management products distributed by Macau and Hong Kong. The permission is reciprocal, meaning that residents from Macau and Hong Kong are also allowed to invest in such products from other GBA cities.
“For example, for French financial institutions, such as Societe Generale Group and BNP Paribas, which have been vividly participating in Hong Kong equity market, it’s now possible they offer products to residents from the GBA cities,” U said, explaining the relevance of the scheme.
On the other hand, when discussing Macau-Hengqin collaborations, U mentioned the Traditional Chinese Medicine Development Base in Hengqin. The base is now home to nearly 200 companies, of which 44 are from Macau.
The Macau government, meanwhile, is encouraging research on traditional Chinese medicine and has plans to create legal frameworks to support the development of the industry.
Judging by all these factors, U said that Macau would still be a very favorable business city for global investors.
“In order to improve our investment regime, we are working to catch up on several factors,” U disclosed. “The government has enacted an E-governance Law that allows public and private entities to use government services electronically. This is much more efficient in terms of cost and procedures.”
He stressed that IPIM has dedicated services for non-Chinese investors to be part of GBA development.
U assumed his position in September last year and has been coordinating the Investor Service Department and Mainland Affairs Division of the IPIM. He started working at the IPIM in 2002 and served as manager of the Research and Information Division from 2008 to 2014. He was appointed as an advisor at the Office of the Secretary for Economy and Finance on December 20, 2014 and worked in that role for the next five years.
U holds a PhD in Management from the Macau University of Science and Technology, an MBA from the University of Macau and a Master of Economics from Jinan University.