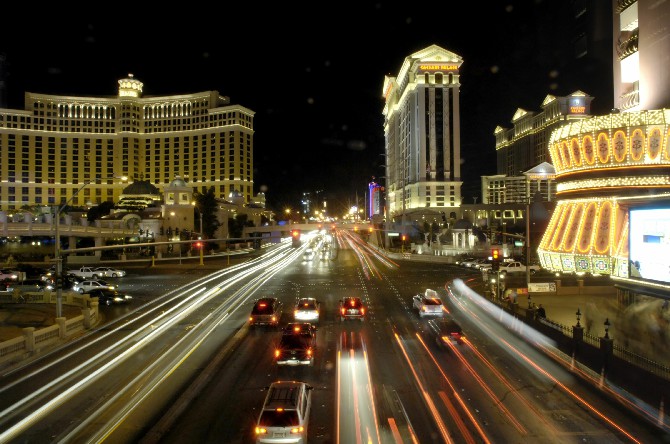 The Vegas road trip, a cherished pastime of Californians, is making a comeback.
The number of vehicles coming to Las Vegas along major highways rose 8.4% in September from the prior year, the first year-over-year increase since the coronavirus shut Nevada’s casinos in March.
The figures suggest leisure travelers are increasingly willing to drive to the city. Cheap hotel rooms are a lure, and there are few entertainment options in Southern California – where museums, theme parks and movie theaters remain closed. Casinos in Nevada began reopening in early June.
By most measures, the city remains in a slump. Air passengers to and from Las Vegas, at 1.71 million in September, were down 61% from the same month in 2019. Convention visitors were essentially zero, as the state has continued to curb large gatherings due to the virus risk. Gambling revenue on the Strip fell 39% to $354.7 million for the month.
But Las Vegas, one of the world’s top tourist destinations and the capital of the U.S. gambling industry, is showing signs of returning to normal. Caesars Entertainment Inc. began opening some of its showrooms, under strict virus protocols. Developer Derek Stevens this week opened Circa, the city’s first new $1 billion-plus resort since the financial crisis a decade ago. MDT/Bloomberg