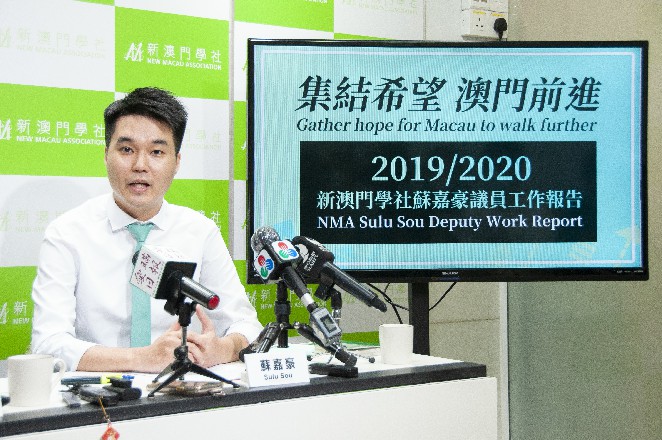 Pro-democrat lawmaker Sulu Sou is still dubbing the closed-door meetings of the committees of the Legislative Assembly (AL) as ‘secretive,’ stressing that there is a lack of transparency in the government in this regard.
In a press briefing held yesterday to discuss his work in the AL, Sou stressed that most of the members of the committee “still adopt a conservative, fearful and unfriendly attitude” towards demands for a more transparent governance.
He noted that there should be no exclusion of press and public from the conference room where many public interest issues are considered.
“The selective summary made by the chairman of the committee after the meeting is far from a complete representation of the full content of the meeting, as well as the speeches by both members and officials. The committee’s operation is still considered secretive,” he told the press.
In addition, he remarked that members of parliament are still limited to one written question each week. Despite the fact that since June this year, the government has formulated new work guidelines to increase the rate of on-time responses to inquiries, Sou said that the content of replies from various departments is flawed and that from time to time, there are situations in which the answers do not pertain to what was asked.
“Some officials even directly ignore the questions, which not only constitutes blatant disrespect for the power of parliamentary supervision, but also undermines the effectiveness of responding to public opinion in a timely manner,” he said.
Meanwhile, speaking about following up on issues related to the protection of civil rights and freedom during the AL’s third session, Sou said that it is evident that civil society is facing “a lot of risks of political repression.”
He was referring to the government’s enforced legislation to establish a “secret police,” its institution of anti-rumour crimes, its testing of CCTV facial recognition and monitoring technology, and its banning of many events related to June 4.
Meanwhile, due to the outbreak of the epidemic, the office of the New Macau Association has received 1,834 citizen cases during his third legislative year, which is nearly three times that of the second year, of which 1,558 (84.95%) cases have been completed. The top five types of cases are education (351), labour (204), security (200), medical treatment (185), and economy (130).