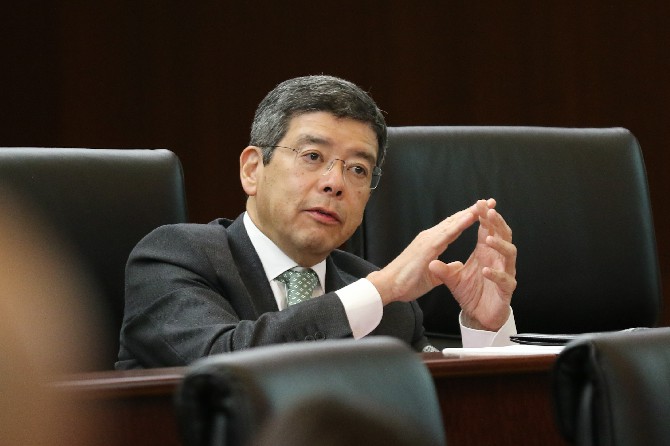 The Secretary for Transport and Public Works, Raimundo Arrais do Rosário, was at yesterday’s Legislative Assembly plenary meeting to update lawmakers on various public works issues.
At the plenary meeting of the AL, lawmakers including Ng Kuok Cheong, Si Ka Lon, Mak Soi Kun and Zheng Anting discussed their concerns relating to the public works in front of the government representatives.
Major topics included Macau’s urban master plan, natural gas supply, the 5G situation, and environment around Ilha Verde. Secretary Rosário and other government officials responded to the questions of lawmakers.
Regarding land and housing issues, Rosário’s sector expects to launch a public consultation on the Macau master urban plan in either September or October. Before the city has an established urban master plan, the local government will not halt the land plot contract outsourcing procedures, meaning that stakeholders of the construction sector will always be able to build projects. New Urban Zone A will have 4,000 units of housing supplied to the private market. The Secretary said that the price of these houses is undecided at present.
Following this was the topic of improvements to the living conditions of Ilha Verde, specifically in relation to pollution caused by car maintenance services. Currently, Macau has 509 vehicle maintenance shops. Responding to lawmaker Si Ka Lon’s proposal to construct a specific building to group all car maintenance service suppliers within the same establishment, the local government disagreed, questioning the financial burden such a project would entail.
Ilha Verde, the most populated area in the entirety of Macau, is unlikely to have any new housing projects, according to Rosário. The Secretary conceded that the Ilha Verde area needs wider streets for pedestrians and, in order to meet such demands, Rosário is considering the abolition of some on-road motorbike parking spaces and the remodeling of the concerned street segments for pedestrians, but only if the affected communities endorse the idea.
In addition to land and space matters, many lawmakers expressed their opinions on 5G development. As of yesterday, local telecommunication service supplier CTM has entered the last phase of the 5G launch. Once the SAR government outsources the 5G license, the company will start spreading the network.
The land authority is inclined to reserve spaces on the New Urban Zone A and Wai Long public housing land plots to set up 5G base stations. Each tower of these two public housing projects will have a design for the facility. The Secretary remarked that a good 5G network requires the proper positioning of base stations and that some households may refuse to have such facilities near their properties. This difficulty occurred and still exists in regards to the 4G development across town.
Another matter concerns the natural gas supply. Currently, the local government is able to supply natural gas to Taipa and Coloane. Due to the population density and road conditions on the Macau Peninsula, the authority would find it hard to construct a natural gas pipeline on this side of the city. A natural gas supply will be delivered for the future New Urban Zone A, according to the government.
In addition to the prior projects, the Light Rapid Transit was also on the agenda. Earlier this week, the Infrastructure Development Office sent an invitation to tender for the construction contract for the LRT Seac Pai Van Line. Once the opening of bids is completed, the public will learn the deadlines of the completion of this Coloane railway facility.
Regarding the Hengqin component, the Secretary said that this coming December, when he attends another AL plenary meeting, he will reveal more details related to the Hengqin LRT extension. The deadline for the Barra section remains 2023.
The last and most pivotal aspect of Macau’s public works concerned the city’s disposal and recycling processes. Lawmakers Chan Hong and Agnes Lam are worried about the awareness of waste classification and recycling in Macau.
Rosário agreed with the two lawmakers’ comments about the lack of recycling awareness.
He also said that the government is suspending services at the Taipa landfill facility in the upcoming week. After this seven-day rest period, the authority will also reduce the volume of waste acceptance at this facility due to its capacity. As the Secretary confessed, the capacity is “not enough” to cope with the amount of waste.