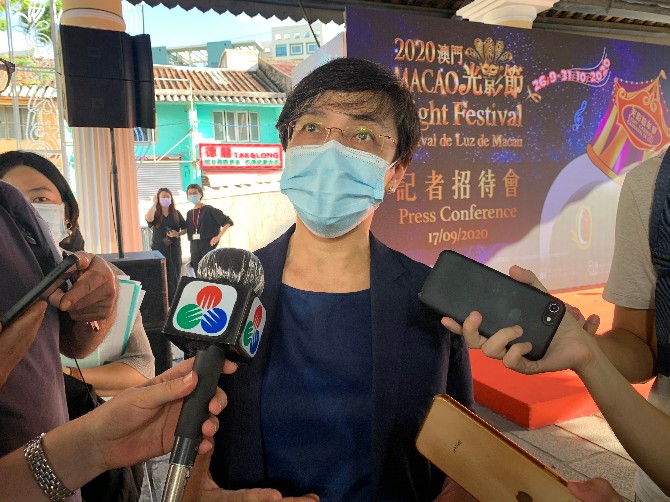 The “Macao Light Festival 2020 – Light Carnival” will be held earlier than usual this year, starting from September 26 to October 31, with a total budget of 21 million patacas.
The upcoming event will be held a few days after all of China reinstates tourist visas to Macau from September 23.
According to the director of the Macao Government Tourism Office, Maria Helena de Senna Fernandes, the sixth iteration of the festival aims to be a “happy event to cheer the public up whilst the pandemic is easing off and to make the city come to life.”
This is one of the first major public events that the government is holding after several events were canceled due to Covid-19.
The festival will stage a mega-mapping show at Tap Seac Square against a backdrop of four historic examples of architecture, weaving mapping projections and music.
The show will be projected onto the façades of four historic buildings, namely the Cultural Affairs Bureau, Tap Seac Health Centre, the Macao Central Library and the Archives of Macao.
This year, the festival will feature eight additional projectors and will run for an additional number of days, hence the slight increase in budget.
During a press conference yesterday, it was announced that this festival will be the broadest in terms of programming.
Speaking on the sidelines of the event, the tourism chief said that they are not expecting to see the same number of visitors at the event this year compared to last year.
“We are not anticipating the number [to be] as many as last year because as we know a major portion of participants in the festival are also our tourists. We’re not looking at a very large number of tourists at this moment,” she said.
The festival will present light installations and interactive games at 12 locations along four designated routes themed “Circus,” “Time Tunnel”, “Candy Kingdom” and “Music Box of Lights,” located in different parishes. There will be a range of hotspots for selfies and check-ins on social media.
Meanwhile, mapping shows will be staged at Macau (Yat Yuen) Canidrome and the restaurant Cozinha Pinocchio Taipa at Largo dos Bombeiros in Taipa Village, as has happened in the past. Two new venues will be added, including China Products Company at Largo do Pagode do Bazar and Wong Ieng Kuan Children’s Library in Areia Preta Urban Park.
LOW EXPECTATIONS FOR
GOLDEN WEEK ARRIVALS
Commenting on the tourist arrivals expected during Golden Week, Senna Fernandes noted that following the opening of Guangdong’s borders, the MGTO is looking at some 12,000 to 16,000 daily visitor arrivals.
“These are not big numbers yet compared to what we used to have, but obviously we won’t go back immediately … we believe it will take a quite long period of time to actually go back and [we are] not even sure if it’ll go back to pre-pandemic levels,” she said.
Currently, the city’s hotel occupancy rate is at 20% to 25%, and some 11% for five-star hotels. The MGTO believes that reaching 50% occupancy for Golden Week would be a “good sign” of recovery.
“We have passed many months where we have had low occupancy, even now. If we’re not able to have more tourists staying with us, it means it will also trickle down to all other sectors of industry,” she added.
A recent survey conducted by brokerage Morgan Stanley shows that five out of the 23 hotels it surveyed were already fully booked for Golden Week.
These hotels were five-star hotels, including the Ritz-Carlton Macau, StarWorld Hotel, Morpheus at City of Dreams Macau, Studio City and Four Seasons Macao.