No injuries from TurboJET fire 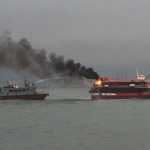 A TurboJet ferry en route to Hong Kong last Saturday afternoon caught fire, but its 134 passengers escaped unharmed. The flames started abruptly at the stern of the vessel while it was setting off from the Sun Yat Sen Memorial Park in Sai Wan at around 5 pm. The fire brigade responded immediately and arrived in time to put out the flames. Initial investigations suggested that a malfunctioning machine caused the fire, ruling out any suspicious causes. Black smoke was seen billowing from the vessel after it was dragged to the Hong Kong–Macau ferry terminal in Sheung Wan. The ferry operator said that all passengers were moved to the lower cabin as soon as the incident occurred, as required by the ship’s emergency protocol.