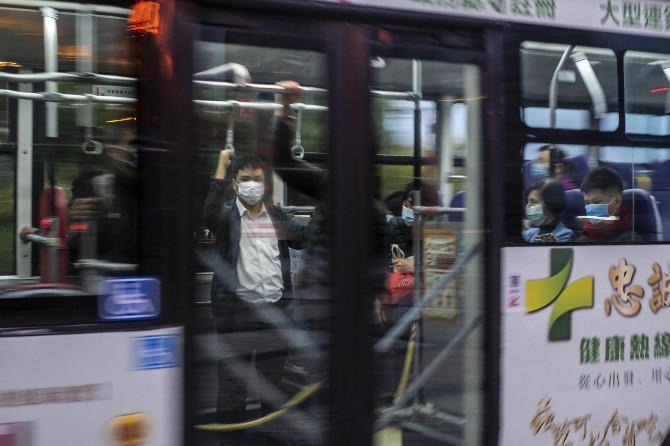 The Public Security Police Force (PSP) has arrested two men who attacked bus drivers because they were angry about being made to comply with facemask policies on the bus, the police department reported during the joint police press conference yesterday.
On September 11, a local man in his 50s, surnamed Pun, boarded a bus at Rua Nova da Areia Preta at 6:50 p.m. Pun was not wearing a facemask at the time. The bus driver immediately asked Pun to put a mask on.
However, Pun was angered and refused to comply with the rule. The suspect only agreed to cover his mouth with the facemask but not wear it properly. Pun, who was standing next to the bus driver, was ordered to get off the vehicle. The police department received reports as the incident occurred. The bus driver then parked the vehicle at the Centro de Actividades Juvenis do Bairro do Hipódromo bus stop located on Avenida Norte do Hipódromo and contacted his company for assistance.
Pun then punched the bus driver’s head and ran out of the vehicle. He went in the direction of the Border Gate and the bus driver chased after him.
Suddenly, Pun allegedly took out a key chain with a knife and threatened the victim. He said that he would attack if the victim continued chasing him. The bus driver did not pursue him further.
On September 12, a PSP officer found Pun at his apartment on Rua de Ma Kau Seak. Pun denied assaulting and threatening the victim, but admitted to arguing with him.
As of press time, investigations were still ongoing. Pun has not been presented to the prosecution authority. Pun is under investigation for violating the city’s law in regards to assault and coercion. The bus driver did not sustain any injuries.
The second suspect is a local man in his 60s, surnamed Fong, and the victim is a 44-year-old male bus driver.
Last week, the suspect boarded the bus at Mercado Municipal do Patane without wearing a facemask. The driver reminded him to wear the facemask. The two men engaged in an argument and the suspect cursed at the bus driver before alighting from the bus.
The bus driver chased the suspect, continuing the argument on the street. During their argument, the suspect pushed the driver to the ground and fled the scene. The driver sustained injuries to his hands and waist.
Yesterday, the PSP apprehended Fong.
During the police interrogation, Fong denied the assault accusations. According to Fong, there was physical contact during the chase and the bus driver fell to the ground because he was not careful. Fong admitted to cursing at the driver.
The police authority charged Fong with aggravated assault and aggravated insult. The police have finished investigating Fong’s case and have presented him to the prosecution authority.
The Transport Bureau has condemned the behavior of the two individuals.
Since February, drivers of public transport vehicles and their passengers are required to wear surgical facemasks . If a passenger refuses to wear a mask, the driver has the right to stop the passenger from coming onboard.