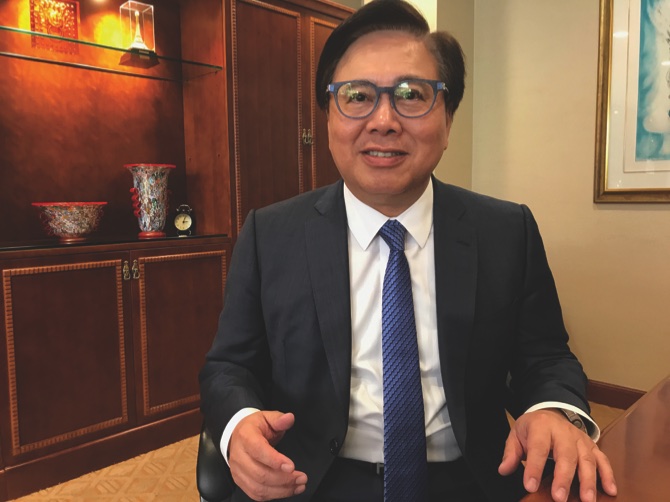 Wilfred Wong, president and COO of Sands China said the gaming operator being “a company with its roots firmly planted in Macau, our thoughts are with the community during this difficult time when the city needs support on multiple fronts.”

In an interview with the Times yesterday, Wong said the business was not much affected during the typhoons’ week, and that the 10th anniversary of The Venetian may still be on the cards.

Macau Daily Times  (MDT)- You pledged MOP65 million relief fund. But let’s be honest, money is not the issue for the Macau government…

Wilfred Wong (WW) – Our pledge is an expansion of our relief efforts made ever since Typhoon Hato struck Macau. We felt that this is the time for us to make a pledge, not just for the immediate relief, but for the longer term.

MDT – Do you have a plan on how to use the money?

WW – Yes, we actually identified projects through our network of non-governmental organizations and the government. For example, on Tuesday we dispatched a team of technical staff to help the residents of a building in Fai Chi Kei, who were facing water supply problems. The team was able to quickly and successfully help restore the water supply there. The team is working with authorities to help check and make repairs to buildings. We are offering technical assistance, equipment, and assisting with stabilizing recently restored electricity and water services. We estimate that, including the buildings we’re working on, we have helped or are helping to restore the water supply for maybe 2,000 residents.  So it’s not just the money, it is the staff time, it is [dispensing] staff from our team to work for the city. For example, the Deaf Association center was wiped out and the building was in danger [of collapsing]. The roof was collapsing, so we sent our engineers out there to [evaluate the situation] and if the government allows us, we repair the roof. We’ll spend money, we’ll get our contractors (working with us on a long-term basis) and we just send them to work in repair operations; so we redirect their resources. Another example is the waterfront; we have a row of wooden huts where the roofs were all gone. We are now sending in contractors to secure them and make sure that they are liveable.

WW – Sands properties in general were not badly affected. We do have ceilings, glasses were broken, windows were broken, but [the damage was] not large-scale and most of it can be fixed within the next two weeks.  So I think as a property we’re lucky. For example, the lift at the Eiffel Tower had to be suspended because the cable [was damaged]. The wind was too strong and pulled it [out]. Apart from these things, in terms of safety, we felt lucky; there were no major injuries sustained by any of our staff or guests during that period. There were some minor injuries to staff –  some of them not at work. They were at home and you know, a window [fell], a leg suffered a cut, but these were minor injuries. And for a while, we were accommodating some of the staff whose homes are gone – or not liveable –  in our hotel rooms.

MDT – Another effect was the cancellation of The Venetian’s tenth anniversary celebrations on the 28th.  Are you still going to throw a party at some point?

WW – We have not made a decision yet, but we felt that the tenth anniversary is still a milestone that should be remembered and it’s also important for our staff and our associates. Over the next couple of months we should [wait and] see how the situation is [evolving] and how Macau as a whole is recovering. From what we saw in the first week, it looks good. Things are beginning to return to normal; the government is allowing tour groups to come back and so on. Water is 99 percent restored, as well as electricity. That’s why we didn’t say we have canceled [the celebrations]. We may postpone it, but if we do something it will be much later in the year.

MDT – How was the business affected?

WW – The business and the gaming in August [has been] okay as a whole.  If it were not for the typhoon it would have been better, but generally July and August were good months, and during the typhoon period our occupancy [rate] was very high.  That’s why we have to maintain all the services because there were over 10,000 rooms filled with guests in our property.  So we have to keep the minimum service level going on, but luckily the power outage was only a few hours in our case.  The air conditioning resumed much later –  a couple of days later – but once the power was back on, we never ceased operations because our backup generator was in operation and the first thing we put back in service was the food court.  So by 6p.m. that day [August 23] the food court was up and running, and we managed to feed the guests.  Otherwise, where would they go? There’s nowhere for them to go. So business-wise, I think last week has been quiet because fewer Hong Kong people are coming and tour groups were not coming at all [from the mainland]. Zhuhai was also damaged, so not many people are coming across the border. But come September, business will resume as usual because we do have many MICE [events] already booked and they have not been canceled. Hopefully we will have a solid September.