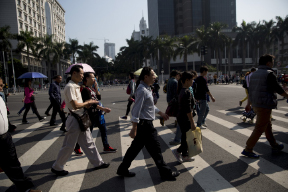 The Times has learned from Zhuhai residents that the city’s police authority is not immediately issuing travel endorsements for visiting Macau. Rather, according to information disclosed by immigration officials, this process will take at least seven days.
Yesterday, Zhuhai resumed issuing travel permits for its residents to visit Macau under the first stage of the gradual IVS resumption. If the application procedure had remained the same as before, Macau could have had its first mainland visitor on the same day. However, that is apparently not the case.
Instead, Macau will not have its first visitor from Zhuhai with a tourism endorsement until next week.
About 70,000 people had entered Macau yesterday by 4 p.m., a 6.3% drop from same period on Tuesday, the Public Security Police Force, which handles border control, disclosed.
Previously, mainland residents could apply for a travel endorsement to Macau from a self-service kiosk. The permit would be created immediately. When submitting paper applications to an immigration officer, the number of days taken to process the application varies from province to province. In general, it takes no more than 10 working days to apply for a travel endorsement to Macau using manual service methods.
Currently, Zhuhai immigration has suspended all kiosk machines.
Applicants can now apply for manual service through the official WeChat account of the Zhuhai police department.
As of press time, any individual who wishes to apply for a travel endorsement to Macau must first make an appointment via official channels, including the WeChat account. The Zhuhai police department will not offer the service to those without an appointment.
Tourism visas were being issued again for the first time yesterday. Applicants can make an appointment for up to 10 days ahead.
All vacancies for August 12 and 13 were already fully booked as of 2 p.m. yesterday. According to some applicants, the Zhuhai immigration authority said that the visa will be ready in seven days. So applicants who applied yesterday will only get their permits on August 18 or August 19, depending how the authority calculates the waiting period.
A report published on the official Macau Commercial Post Weibo account showed that long queues and a small crowd had formed at the Exit & Entry Administration Service Center of the Public Security Bureau of Zhuhai City yesterday morning. Besides this immigration office, there are seven other locations where Zhuhai residents can apply for the permits.
As present, only Zhuhai residents can apply for the visa. On August 26, all Guangdong residents will be eligible to apply, while the policy will be expanded to the rest of the mainland on September 23. JZ