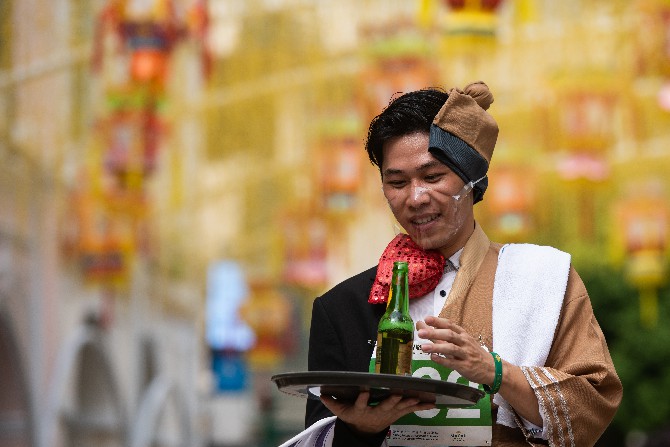 To celebrate World Tourism Day, designated on September 27 annually, the Macao Government Tourism Office (MGTO) organized several activities yesterday involving residents and visitors alike. In the afternoon, the government department held its traditional Tray Race outside of the Ruins of St. Paul’s. Under the race rules, contestants in different costumes must balance a bottle of Macau Beer on a tray and run from the heritage site, through the Historic Centre of Macao, and deliver the beer safely to the finish line at Senado Square. Over 90 contestants representing 20 local hotels and restaurants participated in the race this year. The first prize in the male category went to Garcia Rhoderick Robledo on behalf of Venetian Cotai, S.A., whereas Liang Lina, also from Venetian Cotai, S.A., won the first prize in the female category. The Best Costume Awards of this year were presented to Cheong Chi and Xian Ling both representing Future Bright Group.

The opening ceremony for the Macao Light Festival 2020 – Light Carnival was held in Tap Seac Square on Saturday night. Organized by the Macao Government Tourism Office (MGTO) in partnership with other public entities, the festival is now in its sixth edition. This year’s event will last until October 31. This year, the festival is lighting up Tap Seac Square for the first time with a mapping show projected upon four historic façades. Four routes are mapped out across 12 locations in town to create a city-wide carnival, according to the organizer. Acting Director of MGTO Ricky Hoi was at the opening ceremony in lieu of his boss, who was in Beijing for the promotional event dubbed Beijing Macao Week. In his remarks at the ceremony, Hoi stressed that large-scale events such as the Macau Light Festival prove “we are ready to welcome visitors to Macau once again.”