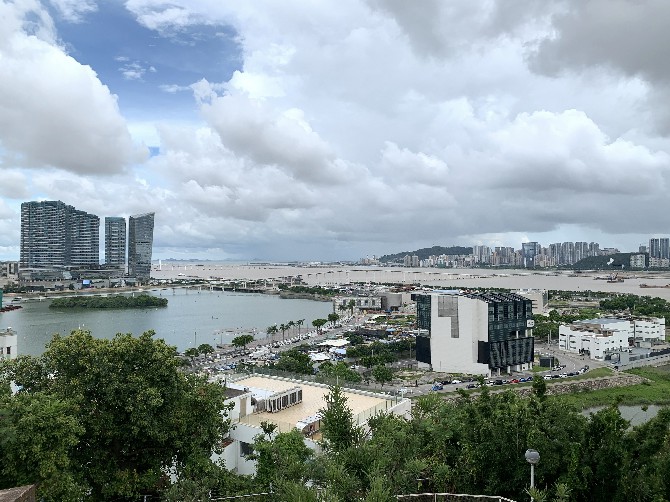 A view from Penha Hill

Several participants at the government’s second consultation session on the Master Urban Plan and the Light Rail Transit’s East Line voiced their disagreement with the building height clearance that would govern future developments on Nam Van, and proposed a 20-meter clearance instead.
Currently, the Master Urban Plan proposal recommends a building height clearance of around 62.7 meters in that area. For reference, the Macau Tower is 338 meters tall. The land plots concerned are Zones B, C and D, along the coast from the Macau Tower to MGM.
The participants thought that the proposed height clearance would significantly impact the view to and from Penha Hill as well as the chapel on top. The proposed 62.7 meter height clearance is more or less as tall as the hill.
At the moment, the Our Lady of Penha Chapel has views of the unblocked 180-degree panorama. Buildings on the hill are required not to block the chapel’s views. The tallest building that exists along the view line from the hill is the Court of First Instance Building, which is about 35 meters tall.
Session participants found this proposal to be unreasonable, because the area closest to the hill is allowed to build buildings of the maximum permitted height, meaning that they could interfere with the views from and to the hill and the chapel.
The government has commissioned a private company to run the public consultation for the two projects.
The panel at the session was asked if the government equates high-rise buildings with prosperity.
Participants also took the Legislative Assembly building as a reference on the height clearance. The building is about 20 meters tall.
Lawmakers, architects and urban planners have suggested that the height clearance might jeopardize the city’s views and coastlines. Meanwhile, the government has admitted that developments along the coast would impact the coastline.
In addition, concerns about the walled building phenomenon were also raised during the session. The phenomenon occurs when high-rise buildings extend along a city’s periphery or coastline, as could be the case for Macau. This can impact the city’s ventilation, as the buildings block air movement.
An urban heat island will be created by the human activity occurring across the city center and the lack of air movement. This means that heat would be trapped in the city’s central parts.
One session participant proposed that the Nam Van Zones be reserved for public leisure activities and green zones. It was suggested that judging from current land reserves the government possesses, the issue of the government leasing private buildings for offices can be resolved without using the Nam Van Zones.
The deconstruction of the former Luk Kuok Restaurant was also raised during the session. Participants used it as an example to criticize the government’s negligence of historic sites. The protection of Ilha Verde Hill was also discussed at the session.