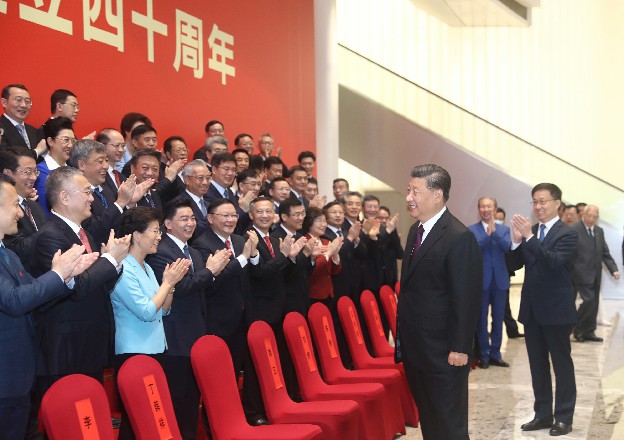 President Xi Jinping vowed to press ahead with plans to gain the global lead in technology and other strategic industries, despite expanding efforts from the U.S. and its allies to check China’s rise.
The Chinese president reaffirmed his commitment to “opening up and reform” as a strategy for gaining economic advantage in a 50-minute speech yesterday to mark the 40th anniversary of Shenzhen’s establishment as a special economic zone. With hundreds of local officials and executives present including Huawei Technologies Co. founder Ren Zhengfei, Xi called for the making of the southern metropolis into a “model city for a great, modern socialist country.”
“We need to unswervingly implement an innovation-driven development strategy to foster new engines and new trends, so as to build a technological and industrial innovation high-ground with global influence,” Xi said, in remarks that didn’t mention China’s disputes with the U.S. and made only passing reference to “many unprecedented challenges” from abroad.
The speech represented a high-profile nod of support to the companies and leaders in the so-called Greater Bay Area, a designation that’s meant to push China into higher-quality manufacturing and better integrate the former colonies of Hong Kong and Macau into the mainland. That means bolder policies to knit together the region’s different linguistic, legal and monetary traditions to create a regional powerhouse rivaling Tokyo Bay or Silicon Valley.
Such ambitions are at the center of growing bipartisan support in Washington to restrict Chinese access to the strategic technologies it needs to overtake the U.S. as the world’s leading innovation power. While President Donald Trump’s administration has taken unprecedented action against Chinese companies, including a pressing allies to ban Huawei from communications networks, Democrat Joe Biden would face pressure to continue the strategy if he wins the presidency on Nov. 3.
“Of course the U.S. tensions play in,” said Fraser Howie, author of “Red Capitalism: The Fragile Financial Foundation of China’s Extraordinary Rise.” “This is a very difficult time for China. They have been hugely dependent on the U.S. for all sorts of things and now they simply can’t rely on that at all. This is a very high-risk strategy for China and Xi.”
Xi urged the faster development of special economic zones in Shenzhen’s Qianhai area and across the Pearl River Delta in Zhuhai to better integrate the mainland with Hong Kong and Macau. Shenzhen should also be given more autonomy for reform, while striving to solve the problems of breakneck growth, he said. Foreign investors’ interests should be better looked after through measures such as refining the negative list and protecting intellectual rights.
Xi said the world had entered a turbulent period of transformation, with rising protectionism and unilateralism, in an allusion to the U.S. President Donald Trump’s America First policies. “The new development pattern is not a closed domestic cycle,” Xi said, making it clear he wants a “new open economic system.”
“This is high-level confirmation of the further opening up of China and also partly supports the narrative that China’s success is built on Shenzhen and Shenzhen is a hybrid of the East and West and borrowed Hong Kong’s development model to a large extent,” said Wang Huiyao, an adviser to China’s cabinet and founder of the Center for China and Globalization in Beijing. “He wants to seize this opportunity to show China is still an attractive place for foreign investors.” MDT/Bloomberg