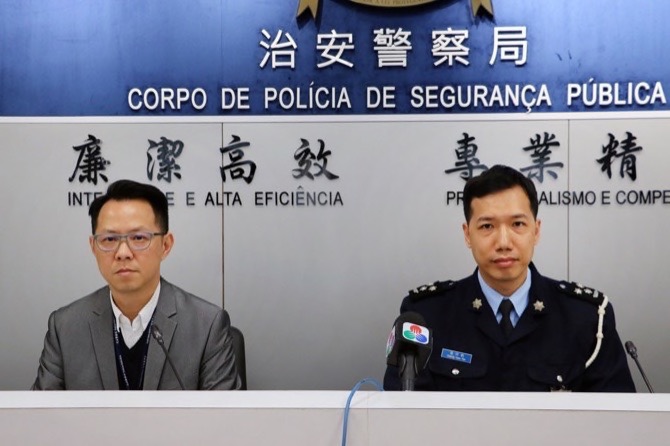 A local male in his twenties is being accused of negligence and the abandonment of a traffic accident victim over a road rage episode that occurred last Thursday on Sai Van Bridge, the Public Security Police Force (PSP) disclosed at a press conference yesterday.

The incident, which occurred on Thursday around 8:45 p.m., took place when the suspect, driving his car on the Sai Vai Bridge in the direction from Taipa to Barra, was hit by another vehicle driving in the lane to his right. The vehicle had collided with the car as its owner tried to exit the Sai Van area by cutting in front of him.

Both vehicles were immobilized for a few moments on the bridge, but when the driver of the second vehicle tried to get out of his car to protest, the suspect drove his car into the other vehicle, hitting it from the back in a fit of rage. He then abandoned the area, driving in the direction of Barra.

After attending to the accident, the authorities began a search for the suspect driver, locating him not long after the incident.

He was tested for alcohol and the result was negative. Although the suspect did not provide many details to the police, it is believed that he reacted emotionally to the incident.

The case has been forwarded to the Public Prosecutions Office (MP) with the driver accused of the crimes of negligence and the abandonment of a traffic accident victim as he did not check the physical safety of the people involved in the crash and he did not call the authorities to report the accident, PSP spokesperson Cheong Heon Fan noted.

The case, reported to the police on Sunday morning around 10 a.m., allegedly occurred about three hours
earlier that morning when the teenager was driving a car that he had borrowed from a friend on Avenida dos Jogos da Asia Oriental in Taipa and lost control of the vehicle, crashing it into a fence separating the road lane from the sidewalk.

According to the police, at the time of the arrival of the first officer, the car had sustained significant damage to its side and was tilted and spilling gasoline.

The police then found that the suspect, who admitted to driving the vehicle, was driving without a driver’s license, as he is under the legal age to obtain such a document.

The Judiciary Police (PJ) reported yesterday that a 71-year-old man from Hong Kong has allegedly been hired by a third person to perform a fraudulent casino chip scam.

The case was reported to the PJ by the staff of a casino in Cotai last Friday, when the man approached the cashier of the casino to exchange a gaming chip with the face value of HKD100,000 into cash.

After a brief inspection, the cashier noted that besides the chip being an old model, not in use by the casino since 2015, it was also forged.

Questioned by the PJ, the elderly man was revealed to have been hired by a third person in Hong Kong to come to Macau and try to exchange the chip for cash. He said that if the trade had been successful, he would be compensated with HKD20,000.

He also said that the man who hired him in the neighboring region is said to have many of those chips, with a total value of approximately of HKD5 million.

The suspect was transferred to the MP under the accusation of high-value fraud.

The case, filed with the PJ on December 31, had allegedly occurred on December 10, when the woman traveled to Macau in the company of the man.

According to the victim’s report, they had arrived in Macau on December 10 and were lodged in a hotel in Cotai.

The man suggested that they should go to the room first to store their belongings there and rest before going to the casino. The woman accepted the suggestion but said that after arriving in the room, the man showered, exited the bathroom completely naked and raped her.

After that, she said they went to the casino together to gamble before heading back to the mainland the following day.

Only when returning to Macau on December 31 did the woman decide to press charges over the rape case, having been submitted to a medical examination where she showed several bruises on both her arms and legs.

Last Friday, when the suspect was trying to reenter Macau via the Outer Harbor Ferry Terminal, he was detained by the police.

He has denied all of the accusations, but the PJ believes that there is enough evidence to forward the case to the Public Prosecutions Office under the accusation of rape.

A 24-year-old tour bus driver is being accused of drug consumption and possession of drug paraphernalia, the PJ spokesperson informed.

The case started with an anonymous tip-off to the PJ that informed the force someone was consuming drugs in an apartment located at Rua dos Pescadores.

The PJ deployed officers to the site and found the 24-year-old in the apartment. No drugs were found at that time but an instrument used for the consumption of methamphetamines was found and the man admitted to having consumed the drug.

He also said that he had bought the drugs in the NAPE area from a mainland man for the price of MOP1,200.

A 36-year-old mainland man jumped to his death from one of the floors of StarWorld Hotel on Sunday, being discovered by the hotel’s security. The case was reported to the police authority at approximately 3 a.m. on Sunday.

According to hotel security, the man is suspected to have jumped from the hotel’s area of refuge, a location designed to hold occupants during a fire or emergency when an evacuation may not be possible.

His death was confirmed at the scene by medical professionals and fire fighters.

The case has been forwarded to the investigation department of the Judiciary Police.