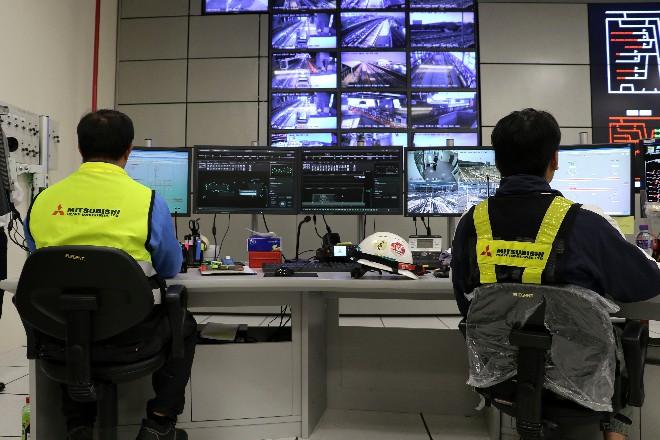 The Macao Light Rapid Transit Corporation, the operator of the Macau’s Light Rapid Transit (LRT) network, has issued an apology to the public regarding a major system breakdown on Friday.
The incident concerned a carriage that stopped at the Pai Kok Station and could not continue its journey automatically. The central control thus turned to manual operation and moved the train to the next station, Cotai West, where the carriage became unresponsive.
The incident caused a service suspension from 9:11 p.m. on Friday and forced about 100 passengers to use another carriage. Only one side of the tracks was available during the incident, which delayed the train by about 24 minutes.
The Macao LRT Corp is referring to the incident as the first major breakdown of the transit system.
In early July the system also saw a service suspension due to a power failure.
A resident, surnamed Lam, told local newspaper Macao Daily News that it was unacceptable to see two incidents in less than two months. The frequent system breakdowns discourage people from using the system because “it could be time-wasting,” Lam argued.
Meanwhile, the Macao LRT Corp has been criticized for not promptly releasing crucial system malfunction information. In addition, there have been flaws in the communications between the company and the Transport Bureau (DSAT).
A member of the Transport Advisory Council called for a clear mechanism of communications be set up to improve the release of information and degree of transparency. The Council member also suggested the DSAT take a greater lead in obtaining operational data.
The Macao LRT Corp is a publicly funded company with limited liability. The company has registered capital of MOP1.4 billion, with 96% of shares held by the Macau Special Administrative Region Government, 3% by the Industrial and Commercial Development Fund and 1% by the Science and Technology Development Fund.
According to the Macao LRT Corp’s company profile, the corporation is responsible for the construction and maintenance of the LRT system, as well as the operation thereof. The operation contract, however, has been assigned to a subsidiary of Hong Kong’s MTR Corporation, the MTR Railway Operations (Macau) Company Limited.
It is believed that after 2023, when the operation contract with the MTR expires, the Macao LRT Corp will take over the daily operation of the system.
For that reason, lawmaker Ella Lei submitted an inquiry to the government to ask about the system’s employment of non-resident workers, particularly with regard to the career level and type.
She also asked about training local people to work in positions, as well as the target size of the trained workforce in the next few years.
Referring to the July incident, the lawmaker pointed out that the system will become fragile if no local workforce is capable of handling some of the more frequently seen minor problems.
In that incident, Lei pointed out, technicians could not come from Japan, where the carriages were made, to fix the problem. This is an illustration of the importance of a local workforce, according to Lei.
Macau’s LRT system has operated for nearly eight months and has already seen several technical incidents. Less than a month after its inauguration, it had already experienced four system failures.
A major failure happened at the turn of the year when passengers entered the gate on December 31 and could not exit on January 1, 2020. Social media users compared the incident to the “Y2K” or “Millennium Bug” fear of 1999.