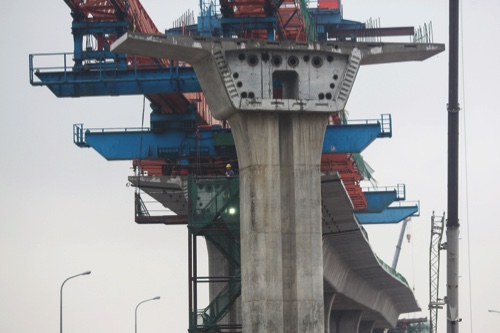 In the “Third Special Audit Report on the First Phase of the Light Rail Transit System” published yesterday, the Commission of Audit (CA) revealed that the Light Rapid Transit (LRT) budget will substantially surpass the Transportation Infrastructure Office (GIT)’s 2013 internal estimation of MOP14.27 billion. The report has also criticized GIT for the lack of supervision over the construction, which has led to a “severe delay” in the LRT Taipa section of more than 300 days.
The initial cost of the LRT first phase – both the Macau and Taipa sections – was estimated by the GIT to be MOP7.5 billion in October 2009. In 2011, the estimation skyrocketed to MOP11 billion. However, the estimation in 2011 only reflected the static investment. After including the contingency provision and the provision for changes in valuation, the budget then further soared to MOP14.2 billion in September 2012.
“Due to the increase in construction costs, especially the rising prices of steel and concrete, although there are no substantial changes to the Taipa section (…) the valuation [of the section] still rose significantly from MOP1.5 billion in 2009 to MOP2.62 billion in 2011, before going up further to MOP3.34 billion in 2012. It is worth noting that since the route of the LRT Macau section is still awaiting adjustment, the estimated date of operation will be postponed further. If the growth rate of the construction cost is close to that of previous years, the cost for the first phase [of the LRT project] will certainly exceed far beyond MOP14.2 billion,” the report suggested.
The CA also pointed out that GIT has not updated the LRT first-phase budget forecast since September 2012. GIT claimed that there was yet to be a confirmed plan for the Macau section and a budget forecast update “does not mean much.” However, the commission headed by Ho Veng Hon believes that without the financial data, the authorities cannot make decisions, and the public cannot carry out discussions on the different proposed routes for the Macau section based on the affordability to taxpayers and the economic benefits. “Also, if [GIT] did not provide a rough estimation during the discussion and decision-making stage, because it wants to avoid multiple adjustments to the forecast in the future, and if the office only publishes the cost after a proposal or design is chosen, this will be a practice that puts the cart before the horse,” it criticized.
Furthermore, the report revealed that until December 2013, GIT’s internal documents showed that the estimated date of LRT operation was delayed to September 9, 2017, a “severe delay” of 883 days from the estimated 2014 operating date that was stated in the original plan in October 2009.
“Even if the CA excludes the Macau section and only focuses on the Taipa section, which has not seen any significant changes, it still found that the construction progress is seriously lagging behind. The construction of the four segments in the Taipa section started between February and September 2012 and should be finished before June 2015 according to the contracts. However, the actual progress of these segments’ construction has not even reached half the planned progress, with three of them experiencing a delay of between 250 days and 336 days,” the report stated.
The commission suggested that the major reasons behind the delay were the lack of human resources and mechanical equipment. In fact, according to the data provided by the GIT, there is a considerable gap between the workers required and the workers actually deployed in the construction of some areas. For example, the CA found that there was always a shortage of labor in the C370 Taipa Border Segment throughout the year 2013. While the contractor promised to provide between 655 and 789 workers in the first half of 2013, there were at most only 168 people working in one of the months.
In terms of the equipment, the commission found that a contractor had initially promised to boost its equipment input to make up for the delay. Although the contractors kept promising the GIT that they would increase the manpower and equipment input, the data showed that the situation never improved.
Moreover, CA found that GIT failed to handle the construction delay in accordance with the law. The law allows GIT to stipulate that contractors must submit a new working plan within 15 days of when delays occur. The commission report said that although there are apparent delays in the construction of the Taipa section, the GIT had, between May and June 2013, officially requested that the four segments contractors file new working plans to catch up to schedule; those plans were still in the amendment process in June 2014, a year after the request was issued. The office also failed to utilize its legal rights to produce the new working plans itself and instruct the contractors to implement them. “It can be seen from this that GIT has adopted an attitude of procrastination when facing severe delays or when the progress is out of control,” the CA report said.
The audit report also pointed out that although the government can still ask the contractors to compensate for the delay in the future, GIT will have to prepare and provide a considerable amount of information and documents to prove the losses it has sustained. The government may even need to take the contractors to court if they refuse to compensate it. “Most importantly, even if the government is successful in seeking compensation, it is still not enough to cover the losses suffered by the residents and the government,” the report said.

As a result, CA recommended for the GIT to include compensatory liquidated damage in the contracts, in order to simplify the compensation-seeking process and to pressure the contractors into finishing construction on time.
GIT reacted to the Audit report via a statement issued yesterday night, where it stated that in the two previous reports 14 problematic issues were identified and “12 of them were improved by GIT.”