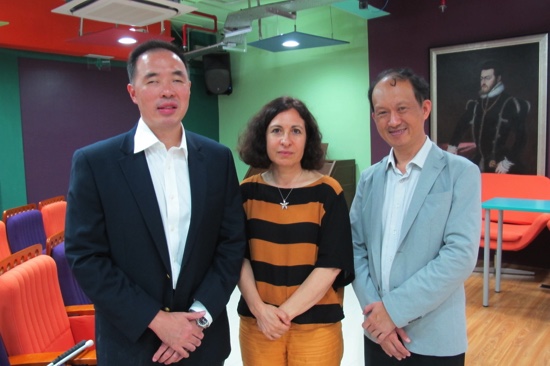 Schools need to become more welcoming in order to further the city’s inclusive policy when it comes to children with disabilities, suggested assistant professor Wong Meng Ee of Singapore’s National Institute of Education (NIE).
The scholar gave a lecture at the University of Saint Joseph (USJ) last week on the topic of special needs education, highlighting the fact that exclusionary practices and policies are often carried out unwittingly.
“Sometimes ‘inclusion’ suggests that society or the school is doing a favor to the person with disabilities, or the teacher has to do extra things to help. I think we need to try to move away from that mindset,” he explained to the Times.
“Too often, when people are working with individuals with disabilities, we tend to come from a position where, yes, we want to be helpful, but sometimes how do we approach that specific help or support?” said the scholar. “The first step can be a very simple way to begin the support process, depending on what the child needs,” he added.
Mr Wong also mentioned that children’s special needs are incredibly diverse, and they require assistance in areas such as reading, listening, seeing and making friends. Nevertheless, efforts as simple as moving the class furniture or installing one more light can be made in order to foster inclusiveness.
“Most people would say: I don’t know how to be inclusive. (…) For a school that has never thought about being inclusive, maybe the initial step is to ask: are you a welcoming school? And if they say yes, that sets the wheel turning in motion, because they will open their arms and have people to come to the school.”
The scholar said such a change in perspectives would also alleviate the pressure experienced by teachers who have a limited background in helping students with disabilities.
“We want to start from the very basic things: how do we get teachers to foster a welcoming spirit within the classroom? Before we talk about inclusion, are you a welcoming teacher?” he asked.
The professor – a Cambridge PhD who himself suffers from visual impairment – pointed out the fact that another phenomenon rooted in schools’ inclusive education practices is that teachers often reserve their expectations on a student with disabilities.
“It is worrisome that a teacher thinks a person struggling has no potential. (…) I think having high expectations is an important thing, because then in a sense you think this person can perform, you think they have potential and they can unlock the potential to improve themselves even more,” he stressed.

Macau’s implementation of inclusive education is still hindered by an overwhelming feeling of reluctance among schools and teachers to admit special needs students.  Some suggest that legislation is needed to ensure that all schools accept these kids.
Since the Education and Youth Affairs Bureau (DSEJ) rolled out a subsidy scheme in 2006, the number of students receiving inclusive education has surged from 60 to 806 as of this academic year. The number of private schools that participated in inclusive education schemes has also increased from 17 to 29, along with 8 public schools.
However, the surge in student admissions
has not been met with a growth in teaching staff. According to the DSEJ’s guideline, a specialized teacher is assigned to eight special needs students, whereas the city currently only has around fifty specialists to assist schools in conducting inclusive education programs.
According to a Macao Daily News report, with sufficient numbers of “normal students” over recent years, many schools are becoming understaffed to attend to those with disabilities. Some are also inclined to favor the “normal students” in admission, whilst some schools are wary of being categorized a certain way by practicing inclusive education.
Many teachers are reportedly reluctant to accept kids with emotional and learning difficulties, due to the concomitant workload. As a result, nearly 40 percent of special students are likely to fail to be admitted to secondary education. BY