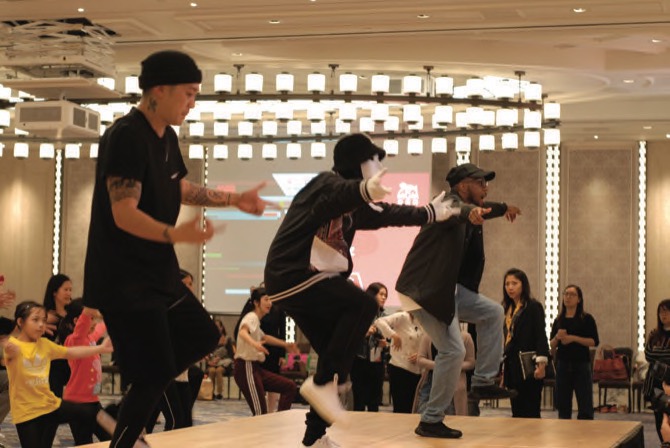 The dance crew is MGM’s first residency show that features a combination of choreography, drama and comedy.

Dozens of dance enthusiasts gathered at MGM Cotai for the Jabbawockeez Workshop, themed “true to yourself.”

One of the crew’s members and instructor, Kevin Brewer, remarked, “Our tagline is to inspire the world through music and dance and us being out here in Macau is really a step towards doing that.”

“It’s about touching base with people and being able to connect with them and physically see their faces and be accessible. It’s a big deal for us that we’re here. We can see that talent in Macau,” he said.

According to Brewer, there are plans to expand worldwide, noting that the workshop was also an opportunity to see local talent.

The masked dancers showcase their hip-hop spirit through the universal language of dance, showcasing and teaching different styles and movements to local participants.

“I think if we spent a little more time with them then we would be able to get more Jabbawockeez into them,” Brewer added.

The workshop stood as a platform for local dance enthusiasts to connect with the internationally- known dancers.

The participants expressed their keenness to have dance mentors visit Macau to share their techniques.

“I think it’s really nice that they [MGM] organized this workshop and [that] it’s for free. We really use this opportunity to learn from Jabbawockeez. It brings those who share the same passion together,” said a participant.

“This is something I never thought would ever happen,” another remarked.

Jabbawockeez – true to yourself will be presented at MGM Cotai’s MGM Theater until March 31. LV