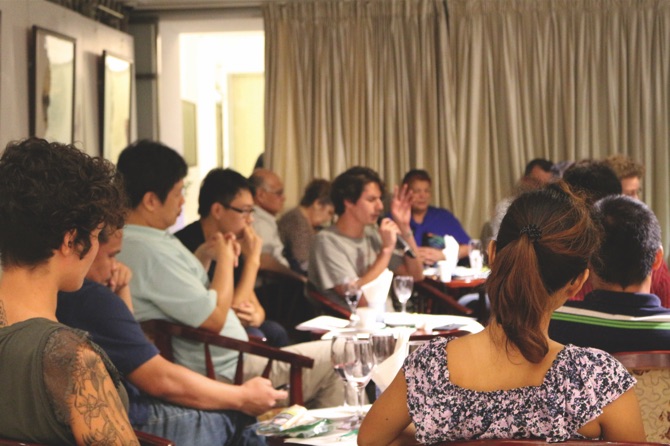 A partnership between the Rui Cunha Foundation and the UM rebooted a philosophy discussion group on Tuesday, after three and a half years of silence. The theme of the discussion was the values of Confucianism, deeply rooted in the East Asian cultures of China, Korea and Japan, and to varying degrees in the countries of Southeast Asia.

Sunday is National Day, celebrating the Chinese Communist Party’s proclamation of the People’s Republic of China nearly seven decades ago. October 1, 1949, the day of the founding of ‘New China’, would mark the beginning of a deliberate process to sweep away the traditions and institutions that had propped up the old dynastic regime.

But 68 years on, it is evident that no degree of Marxist doctrine could displace the quasi-religious supremacy of Confucianism, notwithstanding the onset of the Chinese Revolution and the later Cultural Revolution. It curiously lives on, unaltered, in both the private lives of Chinese citizens, as well as through the methods and values of public and private sector institutions.

“Modern China is essentially founded on anti-Confucianism,” said University of Macau professor of philosophy, Hans-Georg Moeller, during an event at the Rui Cunha Foundation on Tuesday evening. “People like Lu Xun and Mao Zedong were fiercely anti-Confucian, influenced by the values of the Enlightenment.”

However, the teachings of Confucius remain seemingly unassailable in East Asia; so dominant that they have come to be synonymous with the political ideology of “Asian values”, which stresses the principle of collectivism, a preference for social harmony and respect for filial and leadership authority.

Modern advocates of the Asian values ideology include Chinese President Xi Jinping and the former leaders of Singapore and Malaysia, Lee Kuan Yew and Mahathir Mohamad respectively. The latter two were part of a team spearheading the affirmation of the ideology in the 1993 Bangkok Declaration.

The discussion group, which styles itself the “Philosophy Café”, stresses a “conversation, not presentation” structure. Nicolas La Jeune, a co-organizer of the event, PhD candidate at the UM and moderator to the discussion, told the Times that the idea was to generate a conversation among participants and not just present a talk.

The discussion was initially slow, and La Jeune later admitted that this might have been down to the philosopher and ideology under discussion. At least half of the participants were Western, and the teachings of Confucius are not widely known, let alone understood, outside of Asia.

But as the pace of the discussion began to pick up, one of the attendees advanced what he saw as the similarities between the ideals of Confucianism and those of the Communist Party of China, namely a preference for social harmony and deference to authority.

Others pointed out that, although East Asians may not readily admit a personal affinity with Confucianism, they may nevertheless abide by its principles. They argued that the ideology may be so deeply ingrained that it lives on in modern China despite the concerted effort to amputate it.

Although not its intention, the discussion continued to probe the extent to which Confucianism is still present in Chinese government and society, and not all were pleased about this.

Cândido Azevedo, a coordinator at the Rui Cunha Foundation and co-organizer of the event, said that, “it is very important to allow the foundation to be a platform where we can share and exchange ideas. But we avoid speaking about hard political talk here.”

Azevedo said that future sessions of the Philosophy Café will be held once every two or so months, providing that there is still a demand for them. He said they will be conducted in English because of the involvement of the University of Macau.