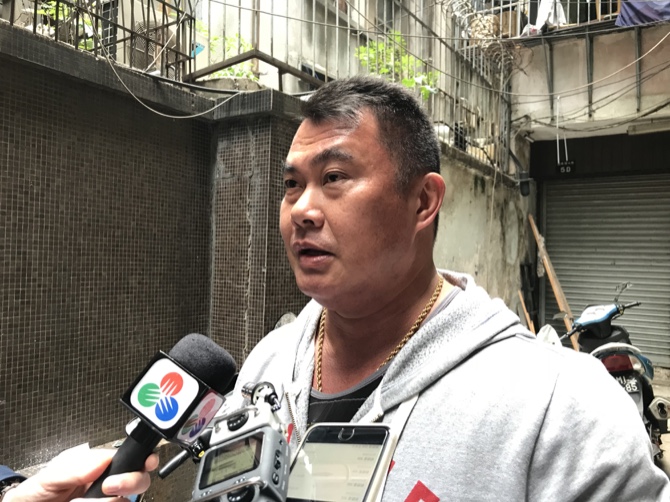 One of the owners, surnamed Wong

The owners of Edifício Lap Hing held a press conference urging the government to demolish unauthorized construction works located at the entrance of the building.

Edifício Lap Hing is located at 5 Rua do Dr. Pedro José Lobo on the left side of the car park next to LusoBank.

The convenience store which has carried out the unauthorized construction work is at the entrance hall of the building.

According to Wong, the building’s owners have paid for a sewage renewal project at the entrance of the building.

However, construction machines could not enter the building’s hall due to Ng’s store.

Wong reported the owners had several talks with Ng, asking him to demolish the store and the unauthorized construction conducted at the store.

However, Ng did not demolish the construction. Furthermore, on December 6 Ng issued a legal letter to the owners, warning them that if there were any damages to his store or his business was affected by the sewage project Ng would ask for compensation.

Wong informed the Times that Ng is not one of the owners of Edifício Lap Hing, and that his store has been operating at the building for more than 40 years.

The owners hoped that DSSOPT would demolish the unauthorized construction quickly. They also doubted the Civic and Municipal Affairs Bureau’s role in issuing a business operation license for the store.

On the other hand, Ng’s son told the media that his father purchased the place from the main owner of Edifício Lap Hing.

Ng also added that he had not yet received any notification informing him that the store had carried out unauthorized construction work. He believes that the store’s operation should be decided by the local government.