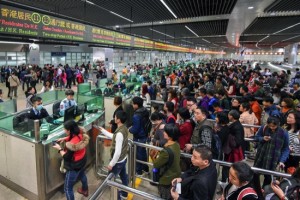 Questioned by lawmakers Sio Chi Wai and Kou Hoi In regarding problems related to delays and complications with border crossings, the Secretary delegated the answers to the Director of the Public Security Forces Affairs Bureau, Pun Su Peng. He informed the lawmakers that a facial recognition system is “being prepared” and “should be entering into operation in the coming year”.
“We are working on this for the tourists. We will try to implement this next year in all border points,” said the director, stating also that this new system is faster and safer than the fingerprint-based one that is prone to “many failures”. He further expressed hopes that the new facial recognition system will “improve a lot on this matter.”
Mr Wong also added that his secretariat has been constantly working to improve congestion, and in the past year the Public Police Security Force (PSP) installed special channels for students during “peak hours” while extending the number of gates from 90 to 152.
Another related topic raised was the possibility of a single document and identity inspection instead of the current double procedure. The secretary stated that the PSP is working together with the mainland authorities on this matter and that an agreement has already been reached with the implementation of this method expected “soon”.
The secretary also noted that reciprocal negotiations to expand the current electronic passage system for citizens of Singapore, Thailand and Australia are also underway. RM