On the road to GP | Guia race 66 officially kicks-off 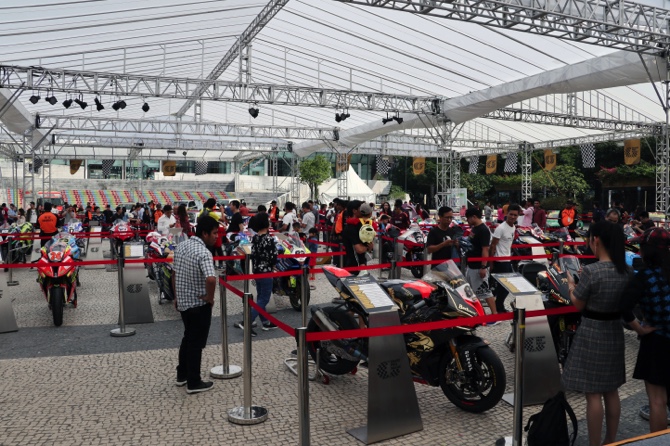 The 66th Macau Grand Prix was officially inaugurated on Saturday in a ceremony held at Tap Seac Square.

The event extended over Saturday afternoon and Sunday until 5 p.m. featuring, as in previous inaugurations, some of the vehicles that will be racing in the streets of Macau later this week.

The GP Auto Show attracted a good number of people, curious to see some of the racing machines up close. It was also a rare opportunity to meet the racers that will be driving them.

The Auto Show featured all the motorcycles that will race in the 53rd Macau Motorcycle GP as well as some of the most celebrated contestants from the FIA GT World Cup.

As a special centerpiece of the event this year, the public observed in detail the new Formula 3 car that will race in Macau next Thursday for the first time. On display was the SJM Prema Theodore Racing from 2019 FIA F3 Championship winner, Robert Shwartzman.

Some of the rescue and support vehicles, including safety cars, medical cars and extrication vehicles were also displayed.

The official opening ceremony was led by the Secretary for Social Affairs and Culture, Alexis Tam, and joined by several racers, including Macau’s only F3 contestant Charles Leong.

The Yearbook of last year’s Macau Grand Prix was also launched at the same event.

The exhibition also included a chance for enthusiasts to take pictures with their favorite drivers and riders and test their driving skills on race simulators.

The Auto Show has been held since 2011 and aims to bring the event closer to families and young children.

The pre-racing events will continue with a series of media and community gatherings before the racing action commences Thursday.