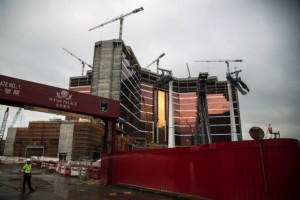 A group or around 130 construction workers from Wynn’s new project in Cotai headed to the PRC Liaison Office to request help in a work dispute with the contractor.
The workers claim that they were forced to work overtime and that there we no guarantees given that they would receive any additional pay.
The Labour Affairs Bureau (DSAL) announced that they were aware of the situation and sent their staff to follow-­up on the case.
The meeting held yesterday morning to ask for help came on the heels of another from the same group of non-­resident workers, held on October 26, when the disgruntled employees first headed to DSAL to present their claims, the moment in which, DSAL says, it opened the investigation process to follow up on the case.
DSAL also states that during the investigation process, some of the workers were demanding compensation that was not in accordance with the law, which led to the department having to clarify the duties and rights of both employees and employers.
The labor department appealed to the workers to actively cooperate in the investigation process and follow the laws of the territory in order to maintain harmonious workplace relations, reminding them that their job is to guarantee fair treatment for all parties involved. RM